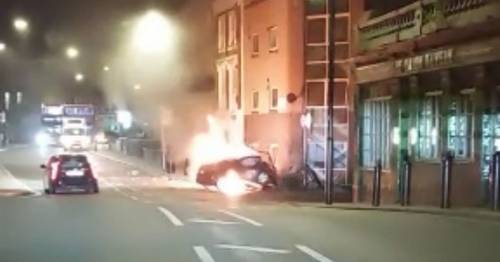 A trapped man was screaming to pals to help get him out as they tried to drag him from a car before it exploded into a huge ball of flames killing three people, said witnesses.

The car burst into flames after ploughing into a block of flats near Westbourne Park tube station in Notting Hill, west London, just before dawn on Tuesday.

Shocked local residents watched in horror as people tried in vain to rescue a screaming man trapped inside the wreckage of the burning vehicle before it blew up.

A police officer at the scene said the driver had come over a canal bridge before losing control of the vehicle.

Firefighters extinguished the blaze, but three people were pronounced dead at the scene.

Have you been affected by this story? Email webnews@mirror.co.uk

A resident who lives across the road from the scene of the horror crash said: "I heard a big smash and knew it was a car crash, but not how bad it was.

"I came out to see what had happened and two guys were trying to get their friend out of the car, but it was being engulfed in flames.

"They had the door open and the man was screaming 'get me out of here!' But they couldn't get him out and ran away.

"The next minute the car exploded in a fireball – there's not really anything anyone could have done.

"I think it was a Seat Leon or something like that, but I'm not sure.

Local residents have said how they heard a loud noise when the car crashed around 4.45am on Tuesday morning
(

Brian Waldy, 70, a retired chartered surveyor who lives in a basement flat in the building next door, said: “I heard this big crash and at least 10 full sized bricks fell down onto the stairs outside.

“I put my dressing gown on and came out and saw the bright yellow flames enveloping the car – about a metre high.

"There was a man a couple of metres away shouting into the car something about the seatbelt buckle.

“But then someone else shouted 'move away, bro, it’s going to blow’, so the guy moved back and got out of the way.

"Then there were at least two explosions and so, to be safe, I went back to my front door.”

A woman who lives a few doors down said: “I was woken up by a super-loud noise.

“By the time I had got dressed and come outside the emergency services had arrived.

“They we’re just working on putting the fire out with their hose.

“This went on for maybe 20 minutes; it would go out, but then ignite again.

"I would say it was a dark car with what looked like some sort of design on it.

"It’s really shocking and I’m sorry for the people who lost their lives.”

Maggie Bernardele, 33, another local resident said: "I flew back from Italy yesterday and got home around 1am.

"My first thought when I woke up was that it was a garbage truck or something like that. But I would never have thought it was a car colliding into a building 50 metres away from our building.

"It's usually a really busy road, but this morning when we woke up it was silent."

A number of residents were evacuated from the building the car crashed into as a precaution and a crime scene remains in place as the investigation continues.

Police are appealing for any witnesses or anyone with dashcam footage to come forward.

"Detectives from the Serious Collision Investigation Unit are appealing for witnesses and those with dashcam footage to come forward following the incident.

"Police were called at 4.50am after a vehicle collided with a residential block in Great Western Road.

"The firefighters extinguished the fire but, despite the best efforts of emergency services, three people were pronounced dead at the scene."

He added: "Work to identify the deceased and inform their next of kin is ongoing.

"There are not believed to be any other injuries and at this stage no other vehicles are believed to have been involved.

"A number of residents were evacuated from the building as a precaution. A scene remains in place and enquiries are ongoing."