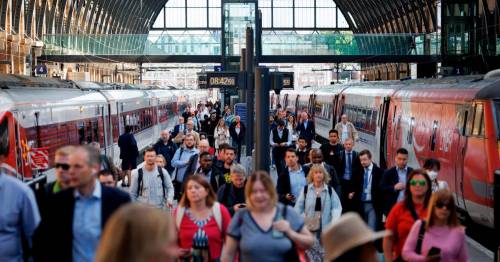 Millions of Brits face travel chaos as the biggest rail strike in over 30 years is set to go ahead tomorrow.

And thousands more flights are being axed, while fuel prices continue to soar.

Rail strikes could kick off a summer of discontent that brings misery for millions as thousands more flights are also cancelled and crippling fuel prices continue to soar.

A last-ditch bid to avert the three-day national action by train staff failed after talks between RMT chiefs and train firms collapsed.

Insiders said the union was still in discussions with Network Rail late tonight with hopes of reaching a negotiated settlement – although tomorrow's walkout is still likely to go ahead.

But it emerged Transport Secretary Grant Shapps did not even attend the talks, with Labour accusing him of standing by and doing nothing while the network is plunged into chaos.

He has not met the RMT for talks since March and has already been criticised for failing to get a grip on the chaos at airports being caused by a ­crippling shortage of ground staff.

“With the country set to grind to a halt, it is utterly absurd that Grant Shapps is simply refusing to do his job.”

RMT general secretary Mick Lynch warned that the battle could continue for months. Turning his fire on No10, he said: “The dead hand of this Tory government is all over this.

Transport Secretary Grant Shapps did not even attend the talks, with Labour accusing him of standing by and doing nothing while the network is plunged into chaos
(

“Until they allow employers to ­negotiate freely, I can’t see that we are going to get a settlement to the issues that are in front of us.”

Britain is careering towards the biggest wave of mass ­walkouts since the 1920s General Strike, as workers in 13 industries fight disputes over pay and conditions.

Up to 1.5 million staff are reportedly being balloted over strike action on a level not seen since the winter of discontent in the 1970s.

They include doctors, nurses, civil service workers, local government staff, barristers, postal workers, BT ­engineers and traffic wardens. On Tuesday and on Thursday and Saturday, half of Britain’s rail lines will be closed.

It means millions of people will struggle to get to work and pupils sitting exams could be hit along with ­revellers heading to ­Glastonbury music festival in Somerset. London Underground workers will also strike tomorrow.

With spillover, the disruption is likely to continue Wednesday, Friday and into Sunday.

The RMT insisted train operators made an offer which was unacceptable. Network Rail was said to have stuck with its 3% pay rise offer, over a year.

To compound the misery, budget airline easyJet today confirmed it would axe ­thousands more flights in the summer to try to avert last-minute cancellations. And Heathrow asked firms to cut 10% of flights.

Drivers trying to mitigate the train strikes face paying an average of 188.70p for a litre for petrol, with diesel at 196.06p. ­

Chancellor Rishi Sunak came under fire for not cutting VAT on fuel.

Mr Shapps said of the rail ­walkouts: “I don’t think the public will be hoodwinked. The families unable to visit their ­relations, music fans hoping to go to Glastonbury, the students unable to get to their exams, ­businesses just beginning to recover from Covid and people who will miss out on their medical treatment.

“They know this week’s rail strikes are the full responsibility of the unions.”

Mr Shapps has been slammed over plans to allow agency staff to cover for striking rail workers, something banned in 1973 by Edward Heath’s Tory ­government. But a Bill to let temps be used is to be tabled within days.

Unite general secretary Sharon Graham said: “When P&O broke the law this government gave them a slap on the wrist. When trade unions defend pay and jobs they change the law.”

The Office for National Statistics is tomorrow expected to reveal inflation rose to a new 40-year high of more than 9% in May, while average wages went up by 4.2% between February and April.

Previous : Tories to bring in law that lets agency staff do jobs of striking workers
Next : Boris Johnson election victory would be a “disaster” says former Tory chairman