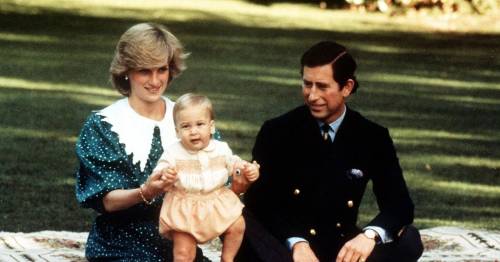 The Duke of Cambridge celebrates his 40th birthday this week, and we can expect to see a number of tributes from the royal family and well-wishers around the world.

Prince William Arthur Philip Louis was born on at St Mary's Hospital in 1982 to Prince Charles and Diana, The Prince and Princess of Wales. He was named after a number of his relatives including The Duke of Edinburgh and Lord Louis Mountbatten.

While it has also been reported that his other middle name of Arthur was a hot contender to become his first name, Charles and Diana ultimately went another way.

According to royal biographer Robert Lacey, Diana proposed the "more robust" name of William that she and Charles made their final decision. He said in PEOPLE magazine : "Diana, Princess of Wales, proposed a more robust name — William, as in 'William the Conqueror,' victor of the famed Battle of Hastings in 1066."

There was another family member with the name William who many royal experts believe inspired the couple's choice of moniker. The royal in question was close to Prince Charles and died tragically young in a plane crash.

On December 18, 1941, Prince William Henry Andrew Frederick was born in Barnet, Hertfordshire to Prince Henry, Duke of Gloucester and Alice, Duchess of Gloucester. He was a grandson of King George V and Queen Mary, a nephew of King George VI and first cousins with Queen Elizabeth II and Princess Margaret. At the time of his birth, he was fourth in line to the throne.

William was the elder brother of Prince Richard (the current Duke of Gloucester) and acted as a page boy at the wedding of his cousin, Princess Elizabeth to Philip Mountbatten on November 20, 1947.

In 1965, the royal started working for the Commonwealth Office. He worked in Lagos as the third secretary at the British High Commission. In 1968, the Prince was transferred to Tokyo, Japan as the second secretary in the British Embassy.

He is said to have enjoyed his life, free from royal duties and strict protocol. He even met the woman he intended to marry – Zsuzsi Starkloff – had she been thought of as appropriate in royal circles.

Starkloff was not deemed suitable to be a royal bride at the time, as she was a twice-divorced Jewish and Hungarian mother of two young children. It is even believed that his cousin, Princess Margaret, was sent to Japan to encourage him to think about his duties over the relationship.

Prince William of Gloucester relaxes on his 21st birthday at his home at York House, 18th December 1962
(


Any long-term plans came crashing down for William and Starkloff in 1970, when his father the Duke of Gloucester began suffering numerous strokes. He had to return to the UK to manage his father’s estate and take on duties as a full-time working royal.

In 1972, Prince William – who was a qualified pilot and owned several aircraft himself – was competing in the Goodyear International Air Trophy. His mother was sitting in the stands to watch her son compete.

Shortly after take-off, he lost control of the plane at a low altitude causing the wing to hit a tree and burst into flames. His body was identified the following day through dental records.

He was well-regarded as a daredevil prince. He enjoyed several dangerous hobbies, such as flying, ballooning and hiking in the Sahara Desert. At the time of his death, he was only 30 years old and ninth-in-line to the throne. His tragic death made him the first grandchild of King George V and Queen Mary to die. He is buried at the Royal Burial Ground in Windsor.

It was also revealed that the prince was a carrier for a disease called porphyria. His diagnosis was particularly interesting as porphyria is an illness that was famously associated with King George III and his 'madness'. Other royals to have it included Mary, Queen of Scots, King James I, Princess Charlotte of Wales and Queen Victoria’s eldest daughter, Princess Victoria.