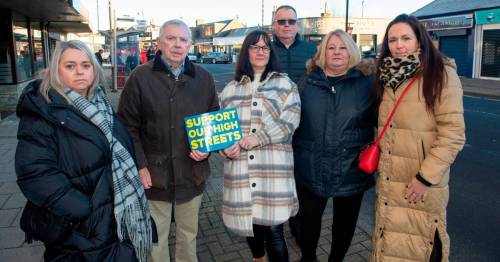 A town has scrapped this year's Christmas market over fears of a terrorist attack and it becoming a Covid super spreader event.

South Ayrshire Council have become the latest authority to cancel after Bath, Leeds, Portsmouth and Glasgow decided to keep the Christmas lights off this year.

This year's Christmas lights switch-on in Prestwick did not go ahead amind concerns over large gatherings.

However, traders were given the green light earlier this month to line the street for one day for the market, Daily Record Reports.

Market stalls, brass bands, a pipe band, the Ayrshire Fiddle Orchestra and Santa were the main features and it had been hoped the event would bring some much-needed cheer to the community.

The Christmas Market in Prestwick has been cancelled this year
(

However, organisers admitted defeat in their bid to stage it.

In a statement, the Prestwick Business Association (PBA) said: “It is with the heaviest of hearts that the PBA has been faced with having to take a hard decision to cancel the “Prestwick Lights Up Christmas” events planned for Sunday, November 28.

“We have faced many obstacles which have been placed in front of us by South Ayrshire Council and the Ayrshire Roads Alliance which we have tried to overcome at every turn.

“But we have learned that Police Scotland have also objected to the Market on the grounds that the Market would cause congestion along the Main Street and also the increased security level across the UK.

“It seems South Ayrshire Council just do not want anyone having a Christmas event.

“We are sorry that, once again, in spite of our best endeavours, there will be no light up at Christmas or the Christmas Market.”

Prestwick councillor Hugh Hunter speculates the organisers, retailers and public have been dealt a raw deal.

He told AyrshireLive: “It is very disappointing that it has come to this. This is one of the most important community events in Prestwick for both local businesses and the public.

“The event was organised with the safety of the public at the front and centre of all planning.

“The police and council were invited to participate in the early planning of the event and having the rug pulled from under it at the last minute are hugely disappointing."

Ayrshire Live contacted Police Scotland for a comment but they declined.

However, it’s understood that during discussions with the local authority, they raised safety concerns relating to the use of Main Street as it is the main route in and out of town.

A council spokesperson cited the recent change in status in the terrorist threat level as one of their main concerns – along with the possibility of Covid transmissions.

The spokesperson said: “The safety of the public is always our top priority.

“In light of the ongoing Covid-19 situation and recent changes to the terrorist threat level, we have been in discussions with event organisers about their safety measures. Police Scotland also had safety concerns about the proposed Prestwick Christmas Market.”

It comes as the Christmas markets in Bath, Leeds, Portsmouth and Glasgow George Square were already cancelled this year.

In Bath, organisers cited Covid concerns and recruitment issues caused by Brexit meant it could not be safely managed.

In Glasglow, a Christmas market will still be in St Enoch’s Square this year.

Previous : Covid ‘super variant’ with 32 mutations found in Botswana ‘could be worse than Delta’
Next : Foreign Office warns Brits in Ethiopia to leave now before it’s too late