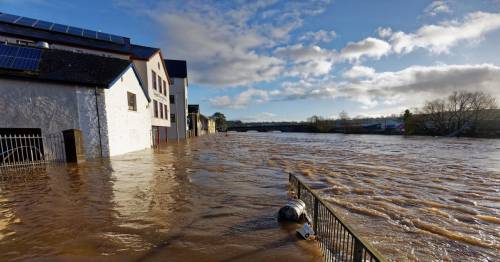 A town which hits "panic stations" every time there is a flood warning won't be getting any new defences, despite having flooded multiple times in recent years.

Carmarthen, Wales, has been hit hard by rising water levels, with businesses on The Quay, by the River Towy, being particularly vulnerable and leaving owners powerless over what to do.

But despite concerns, Natural Resources Wales (NRW) has said they are unable to develop new projects in the area, Wales Live reports.

Tory Member of the Sennedd Samuel Kurtz has claimed the Welsh Government and NRW appeared to be "passing the buck" in dealing with the problem.

But despite concerns, Natural Resources Wales (NRW) has said they are unable to develop new projects in the area
(

Dexters restaurant is one of the businesses on The Quay which has been repeatedly flooded, and front of house manager Ceri Wallace said the NRW calls them when flood warnings are issued.

"It's all hands on deck – panic stations," she said.

"But there is nothing we can do. The water comes through the walls and floors. We can't stop that."

Miss Wallace said the lower part of the premises was used just for storage and admin, with the restaurant higher up.

Flooding around Carmarthen following heavy rain in February of 2021
(

She added: "Every time flooding happens there is a massive media campaign, things are said, and then nothing happens, which is unfortunate. Customers often ask us what the situation is."

He said: "We're now in a situation whereby NRW and the Welsh Government appear to be passing the buck as to who is responsible for progressing a flood prevention strategy for Carmarthen – this simply isn't good enough and it’s not what local business owners deserve.

Secretary of State for Wales, Simon Hart, said he detected more flexibility in the current arrangements than at first glance and has asked NRW to propose a defence scheme for Carmarthen.

Secretary of State for Wales, Simon Hart, said he detected more flexibility in the current arrangements than at first glance and has asked NRW to propose a defence scheme for Carmarthen
(

NRW's flood and water management manager Tim England said Carmarthen "brings its own unique challenges" because much of the lower part of the town was built on a flood plain.

He said while the areas around Pensarn were protected by existing flood defences, extending or constructing flood protection elsewhere was not straightforward for a number of reasons, including how schemes were prioritised, possible adverse impacts and historic infrastructure.

"The Quay was deliberately built lower than other parts of the area to maximise access to the tidal reach of the river, a legacy of its industrial background," said Mr England.

"History tells us there are no easy solutions for the Quay. The scale and challenge of climate change is substantial and increasing, and we will have to manage expectations on how much flooding can realistically be prevented or managed."

He said dialogue was ongoing with Carmarthenshire Council and politicians, but added: "We have reviewed past proposals for the area and nothing has fundamentally changed, which means we are still unable to take forward a flood scheme for the area."

According to the Welsh Government, businesses might also benefit from schemes where homes were also being protected, or where NRW was able to justify a scheme which only protected businesses.

Previous : Bobbi-Anne McLeod: Missing teenager ‘may have been abducted and killed by strangers’
Next : High-level officials behind Ukraine airliner crash in Iran -victims’ report