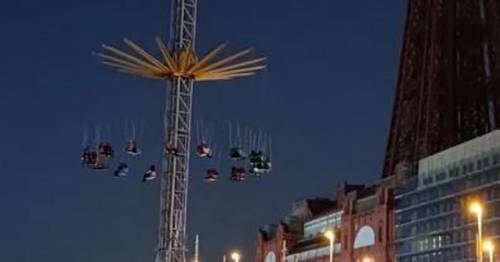 The passengers of the spinning carousel were left dangling in mid-air for around eight minutes before being lowered down to safety, Lancashire Live reports.

The ride is around half the size of the Blackpool Tower and had opened that morning for the first time.

Onlookers to the incident suggested that the disruption may have been caused by a power cut.

Local photographer Philip Downie was taking pictures of the attraction at the moment it broke down and was able to stream it on Facebook live.

Were you on the ride? Email webnews@mirror.co.uk

He can be heard saying: "The power has just gone off on this ride that's on the Promenade, I think everything else is still okay. The big wheel is still going round.

"Nice sunset tonight but yeah, if you're afraid of heights and you were stuck up there now you wouldn't be very happy.

"The music was playing and everyone was having a good time and then the power went off."

He added: "I think it's the first day this has been on today, so may be some teething problems."

Philip could also be heard joking that they "need to put 50p in the meter".

Star Flyer was a new ride that came to Blackpool as part of the Winter Gardens Wonderland Festival and was originally meant to be erected on St John's Square.

However, after concerns around the size of the attraction and safety, council chiefs insisted it be dismantled and moved to the promenades.

Last week, the council said: "As stated previously we have been working with the ride’s operators to find a suitable alternative site. We are pleased to be able to announce that this ride will now go ahead at its new location – the tower festival headland."

After the break down, passengers were helped off and the issue was resolved.

More people were quickly able to use the attraction without any issues and no one was injured.

Responding to Sunday's incident, John Westhead, head of operations at Winter Gardens Wonderland, said: "The ride was not operational for a matter of minutes and fully open for around nine hours on the day, all people were brought down safely by the rides manual system and exited the ride within a few minutes.

"All people went back on the ride straight afterwards and had a fantastic time. This was a very minor issue in what was a fantastic day for Blackpool with many thousands of people coming and supporting the Star Flyer ride and wider Christmas offer in Blackpool."

He added: "All we want is for the town to have a successful Christmas, for businesses to be able to gain additional revenue after a horrendous 18 months, children to be excited for Christmas and for everyone to have a great time."