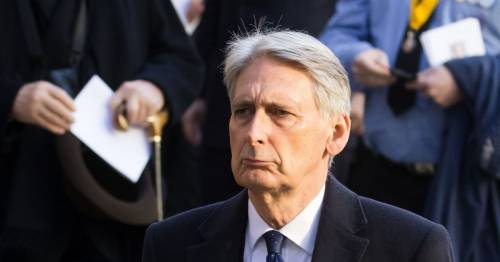 Tory Philip Hammond will face no punishment over lobbying slapdown

Former Tory chancellor Philip Hammond will face no punishment for using his government connections to help a bank he now works for.

Parliament's lobbying watchdog ruled a bid by Lord Hammond to arrange a meeting between OakNorth Bank and a senior Treasury official in July 2020 was "not acceptable" and not "consistent with the Business Appointment Rules."

Advisory Committee on Business Appointments (Acoba) chair Lord Pickles said it had been an "unwise step" for him to contact a senior Treasury official about a project developed by OakNorth.

But Tory Cabinet Office Minister Lord True decided it wasn't a deliberate attempt to break the rules, and so Lord Hammond would face no sanction.

"In that light, although we concur with your conclusion, we do not believe further sanctions should be taken given the particular circumstances of this case," Lord True said in a letter to the chair.

"We also note there has already been public criticism from your committee."

Lord Hammond had argued he emailed Charles Roxburgh, the second permanent secretary at the Treasury, in a bid to establish that senior officials in the department were aware the bank was offering free support to aid the "Covid pandemic national response".

Documents show the bank wanted to meet with the government to discuss "a financial toolkit which might help the government’s response to the Covid-19 pandemic."

But after OakNorth initially failed to get a response from Treasury, Lord Hammond contacted top official Charles Roxburgh to "seek confirmation that OakNorth's message and offer of pro-bono support had been received and understood."

Lord Hammond told Mr Roxburgh that OakNorth was “very keen to ensure that the right people” saw a presentation about “Covid stress-testing.”

When he took the job at OakNorth, the committee told Lord Hammond he was banned from "making contact with HMT if it had been to benefit OakNorth or secure business on behalf of OakNorth."

Previous : Derek Carr channels Jon Gruden advice in Las Vegas Raiders’ OT win over Dallas Cowboys
Next : ‘Asylum seekers are human beings – they flee home because there are no other options’ – Helen Troy