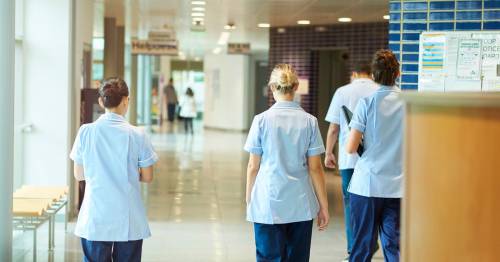 Tory MPs have voted down a plea to ban representatives of private healthcare firms from sitting on NHS boards.

Campaigners have hit out at the plans as part of a major planned shake-up of the NHS structure in England.

New-style Integrated Care Boards (ICBs) will be allowed to include private representatives, alongside NHS clinicians and council public health leaders, as part of their make-up.

Labour tabled an amendment in the House of Commons that would have banned private healthcare reps from serving on these boards.

The Labour ban would have exempted “GPs who hold a contract for the provision of primary medical services in the area”.

The Labour amendment was defeated
(

However, Labour’s amendment was defeated by 300 votes to 192.

Instead, Health Secretary Sajid Javid put forward a compromise that will ban private health reps from ICBs in some situations.

Private sector appointees will be blocked if they “could reasonably be regarded as undermining the independence of the health service”.

Another Labour amendment, adding layers of scrutiny to contracts that are awarded for local NHS services, was also defeated.

The amendment, dubbed a "safeguard from cronyism" by the party, was defeated by 302 votes to 195.

The votes was part of a wider debate on the Health and Care Bill, which has sparked a furious campaign by anti-privatisation campaigners.

Secretary of State for Health and Social Care Sajid Javid
(

The Bill will get rid of 100 or so Clinical Commissioning Groups which decide how local NHS services are provided in England.

In their place will be Integrated Care Systems (ICSs) in 42 regions of England, controlling purse strings and setting five-year plans.

The boards decide what healthcare local groups of people will and won’t receive, what services are kept open, which are shut or scaled back or ‘digitalised’.

The idea of a “corporate takeover” has been branded “complete nonsense” by Health Secretary Sajid Javid, and think tanks such as the Nuffield Trust and King’s Fund have not voiced serious concerns about private reps sitting on ICBs.

But the Unite union has branded it an “NHS privatisation Bill”, with general secretary Sharon Graham saying it will be “used to further run down the NHS and to bring in more privatisation by the back door.”

The union brought together campaigners and celebrities at a rally outside Parliament, while groups including Keep Our NHS Public handed in a 300,000-strong petition against the Bill.

Campaigners are concerned about the presence of private reps on health boards, and another clause in the Bill which will do away with the automatic need to go out to tender for every contract.

This is a bid to cut red tape if, for example, an established local body is doing the job well. The NHS will only have to tender services where it can lead to better outcomes.

But the BMA has warned the rules “allow contracts to be awarded to private providers without proper scrutiny or transparency”.

The Kings Fund added: “Rather than contracts being awarded to new providers without sufficient scrutiny, we believe the greater risk is that contracts are automatically handed out to incumbent providers irrespective of their performance.”

Health minister Edward Argar suggested claims about private sector involvement in the NHS after the Bill were “misleading and inaccurate”.

The minister said "no one will be appointed to an ICB (integrated care board) who would undermine the independence of the NHS".

He added: "It was never the intention for independent providers to sit on independent care boards and it still isn't. We were clear that the conflict of interest provisions, despite misleading and inaccurate claims by some campaigners and others, address this.

"However, we are clear, we are happy to put this even further beyond doubt, the amendment makes clear that no one will be appointed to an ICB who would undermine the independence of the NHS."

He said a Government amendment would prevent stakeholders of private healthcare companies, lobbyists, and "anyone with an obvious ideological interest clearly running counter to NHS independence" from sitting on the board of an ICB.

But Labour’s Justin Madders said: “This is really about who runs the NHS.

“There is a complete and utter incompatibility between the aims of private companies and what we say should be the aims of the NHS and the ICBs.”

He added: “A company’s primary concern is the shareholders, not the patients.

“With that clear and unanswerable concern about conflicts of interest, we invite the Government to withdraw their amendment and support ours.”