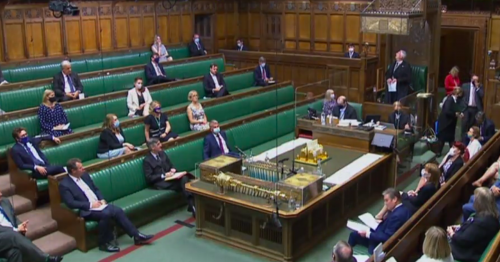 Tory MPs including Jacob Rees-Mogg today snubbed the Commons Speaker by refusing to wear face masks in the chamber.

Dozens of rebel Conservatives opted not to don a mask at Prime Minister's Questions – despite Speaker Sir Lindsay Hoyle revealing all MPs had been “encouraged” to cover-up while on the green leather benches.

Chief Whip Mark Spencer, responsible for enforcing party discipline, did not wear one.

Only a handful of Tories were spotted with their faces covered, while most Labour and SNP MPs wore masks.

Unions had called for masks to be mandatory to protect parliamentary staff.

Prospect General Secretary Mike Clancy said: "The behaviour of the significant number of MPs who refused to wear masks in a crowded PMQs is exactly why we have been asking the Speaker to make masks compulsory for MPs.

"Too many are flagrantly ignoring clear advice from the Speaker on masks, putting staff and others at risk and undermining public health messaging.

"Parliament need to look again at how they can make MPs do the right thing so that staff are not put at risk by those who believe that the rules don't apply to them."

The revolt came after Sir Lindsay wrote to officials from the Trade Union Side, Unite and GMB unions earlier this week telling them MPs had been “encouraged” to wear masks.

Following Monday's Freedom Day relaxation of maks rules, the Speaker wrote: To help reduce the spread of Covid, the Government’s guidance advises wearing a face covering in order to reduce your risk and the risk to others, where you come into contact with people you do not normally meet in enclosed and crowded spaces.

“It is on this basis that Members will continue to be encouraged to wear a face covering when in the Chamber, and when they are transitioning around the Estate or entering venues.” 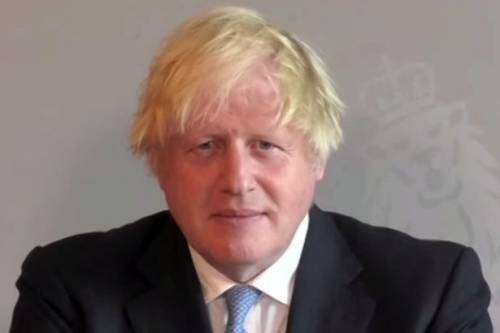 The Prime Minister appeared 'down the line' at PMQs

But he admitted he was powerless to enforce the request, saying: “I have no power to prevent democratically elected Members from coming onto the Estate when the House is sitting.

“As such, there is no meaningful way to enforce a requirement on Members to wear a face covering.”

“Those MPs who refused to wear a mask in the chamber during today’s PMQs are showing flagrant disregard for the health and safety of others – and showing once again that the Tories think it is one rule for them and another for the rest of us.

“The House of Commons brings together MPs, staff and visitors from every part of the UK, and MPs need to show leadership in preventing super-spreading of Covid variants – the virus is indiscriminate in who it infects, as the Health and Social Care Secretary Sajid Javid has discovered.

“Our parliamentary staff are working hard with the Speaker Sir Lindsay Hoyle to update risk assessments and follow the new government guidance.”

Addressing MPs on Monday, the Speaker told them: “I wish to make a short statement about working safely on the parliamentary estate and the wearing of face coverings.

“With the increase in infection levels in the community and people having to isolate, I strongly advise that everyone on the Estate should wear face coverings when moving around, accessing catering venues and in areas they consider crowded, including the Chamber.”