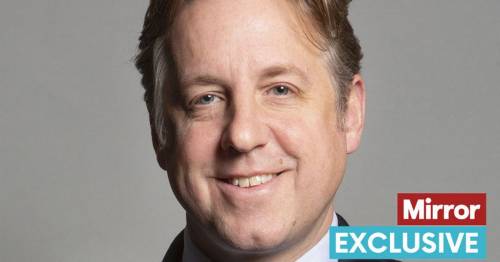 A Tory MP who called for the strictest sanctions against Vladimir Putin ’s regime is exposed today as standing to profit from Russian oil.

The world’s largest oilfield services company Schlumberger Ltd which operates in Russia is just one of 38 firms Marcus Fysh, 51, declares he has “a beneficial interest” in.

Yet on February 24th the Yeovil, Somerset MP tweeted: “Sanctions must include complete bans on dealing with Russia including any Russian banks and commodity producers or their counterparts.

“Global business may need to be restructured accordingly.”

Now the MP has revealed the hypocrisy of that tweet after admitting to the Sunday Mirror he does have interests in a company still servicing Russian oil rigs.

Mr Fysh told us: “I am a minor portfolio shareholder only.

“Schlumberger is the best managed company in oil and gas services which are essential for the provision of non-Russian energy supplies to the rest of the world and hence integral to any hope of keeping the cost of living down and making a cost effective transition to net zero.”

“Instead of attempting to justify these hypocritical investments Marcus Fysh must be open and transparent and urgently end them.”

In the latest Commons Register of Members’ Interests published on 3rd May, Mr Fysh declared “from 24 January 2021, beneficial interest via futures, options, contracts for difference and other holdings” in Schlumberger.

The links Mr Fysh has with the company could mean a cash windfall depending on its future performance.

The firm, based in Houston, Texas, operates in 120 countries and employs 160 nationalities. In the first quarter of this year it reported revenue of £4.85billion, a 14% year on year increase, allowing it to boost cash dividends to shareholders by 40%.

In March Schlumberger announced it would suspend new investment in Russia because of the war in Ukraine but continue with current operations there.

Boss Olivier Le Peuch said: “We will fulfil any existing activity in full compliance with applicable international laws and sanctions.”

Schlumberger has assets worth £647million in Russia which represents 5% of its revenue, according to documents filed with the U.S Securities and Exchange Commission on March 31st.

In a second tweet on February 24th Mr Fysh was calling for strong action against Russia.

He said: “This deceitful attack on Ukraine and the crimes against humanity being committed in its name will not be forgotten.

“A swift, unified and comprehensive response must make Putin’s Russia and anyone who supports it pay for their actions.”

And last month he wrote: “I have supported strong sanctions against those connected with the Russian regime.”

Australian-born Mr Fysh, married with two children, has been an MP since 2015. Before his election he ran companies specialising in agriculture and healthcare.

In June 2020 Parliament’s Standards watchdog found that he failed to register unpaid directorships. He was criticised for his “deprecatory” and “patronising” tone towards the Standards Commissioner and told to apologise.

And in December, 2021 he sparked controversy by comparing the introduction of Covid vaccine passports to living in Nazi Germany. Deputy PM Dominic Raab called the comment “crass.”

Previous : Labour calls for more diversity among top Whitehall bosses
Next : Why the Queen’s nickname is ‘Gary’ – and she has Prince William to thank for it