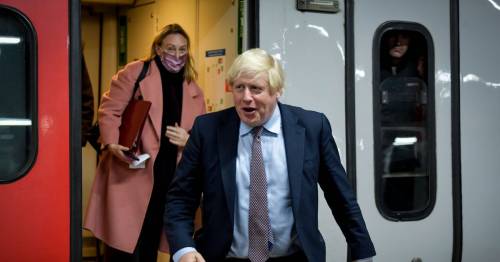 Tory chiefs sent a bizarre begging letter to supporters over this week’s train strikes – after Boris Johnson was accused of wanting industrial action to go ahead.

Ministers have failed to meet with unions and employers over the looming strikes, despite Labour calling for them to act as a facilitator in talks.

And Keir Starmer today accused Mr Johnson of wanting the strike to go ahead so he could “feed off division.”

This week has seen the Government pursue a number of so-called “wedge issues” – including the Rwanda refugee plan, the Northern Ireland protocol and holding Commons debates about train strikes – which divide public opinion and draw focus away from the PM’s Partygate woes.

Campaigning in Wakefield ahead of Thursday's by-election, Mr Starmer said: "The Prime Minister does want the strikes to go ahead.

"He wants the country to grind to a halt so he can feed off the division.

"The question for the Prime Minister is why are you not lifting a finger to resolve these issues?"

But despite ministers’ failure to act, an email sent to Tory supporters this week branded the planned action “Labour’s strikes”, urging people to sign a petition against them.

And it begs for donations to “help fund our Campaign against Labour’s strikes.”

Mr Starmer said of the rail strikes: "My position and the Labour Party position is that I do not want these strikes to go ahead.

"I want all the parties around the negotiating table, even at this late hour, to resolve this.

"But, like the British public, I'm frustrated because the Government is sitting it out, it's not lifting a finger to resolve these strikes."

Union leaders yesterday confirmed next week’s rail and tube strikes would go ahead after talks failed to resolve a bitter row over pay, jobs and conditions.

The Rail, Maritime and Transport union (RMT) said it had held discussions in the past few weeks at senior levels with Network Rail, train operators and London Underground.

General secretary Mick Lynch said: "Despite the best efforts of our negotiators no viable settlements to the disputes have been created."

A Department for Transport spokesperson said: "Strikes should always be the last resort, not the first, so it is hugely disappointing and premature that the RMT is going ahead with industrial action.”