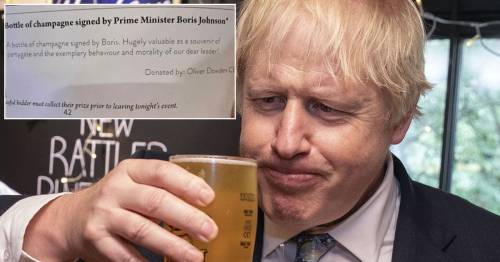 The Tory chairman has denied mocking Partygate after he donated a champagne bottle signed by Boris Johnson to a charity auction.

Oliver Dowden was accused of “laughing at” Brits after he gave the booze to the Hertfordshire Community Foundation in his seat of Hertsmere.

It was sold off at an 'Evening with Harry Potter' fundraiser last night, with Mr Dowden present. There it was branded a “hugely valuable as a souvenir of Partygate and the exemplary behaviour and morality of our dear leader!”.

The description spread like wildfire online after being tweeted by the food critic Jay Rayner – with Labour MP Chris Bryant fuming: “They really are laughing at us.”

A spokeswoman for Mr Dowden insisted the bottle was donated “in good faith several months ago” – and he did not write the description, which was “obviously not his view”.

Allies said Mr Dowden thought the description was “crass” and it was written by someone involved in the local charity with no knowledge of the Conservative Party. It’s understood Oliver Dowden attended the fundraiser personally, but a source insisted he raised concerns as soon as he saw the description.

After an online furore, the charity apologised "for any offence caused" and confirmed Mr Dowden had no involvement in writing the caption.

Ex-No10 aide Dominic Cummings tweeted: “You can see why as I told MPs there were no10 mtngs 11/20 about calling a press conference to announce the PM has effectively gone mad & is about to kill 10s of 1000s more people while he f***s off to play on his bike at Chequers, 'let the bodies pile high in their thousands’.”

Comedian Chris Addison tweeted “C***s” while Labour MP Karl Turner added: “Confirmation if ever needed of the fact that these dishonest law breakers and literally laghing [sic] at us.”

But a spokeswoman for Mr Dowden said: “This item was donated in good faith several months ago for a local charity auction.

“Oliver Dowden had no prior knowledge of the description and this is obviously not his view”.

The event on Thursday night was held by the Hertfordshire Community Foundation. The charity gives philanthropy advice and says it has awarded more than £15m to local communities since 1988. That includes £2m in 2020/21 to “charitable projects working to help the most vulnerable residents of Hertfordshire.”

According to the charity's website, the event was 'An Evening with Harry Potter' at the Warner Bros Studio Tour in Watford – one constituency over from Mr Dowden's.

It promised "a magical trip into Harry Potter's wizarding world in aid of HCF. Includes a seated dinner in the Great Hall and an exclusive after hours access to the Studio Tour."

The charity issued a statement saying: "This item was donated in good faith several months ago as part of a charity auction raising funds to support some of the county’s most vulnerable residents.

"The description was not drafted or seen by MP Oliver Dowden prior to the event. On behalf of the charity, we apologise for any offence caused."

Earlier, Jacob Rees-Mogg claimed the latest fines slapped on Downing Street over the scandal were “a non-story”.

He said: “I think this was an important story in February when it first became known, and that there was great concern and there was a feeling of people who were bereaved particularly about it.”

But he went on: “The fines are a consequence of things we knew in February and it was a story in February and people now know about it and have made their judgment on it and there are other things going on that are more important,” adding: “I’m afraid I think this is a non-story.”

Former Foreign Secretary Jeremy Hunt told a magazine: “I would be very open with you that I don't rule out a return in the future.”

Previous : Boris Johnson at weekend retreat to decide on detonating his own Brexit deal
Next : UK weather forecast: Brits set to sizzle in hottest weekend of year with 24C highs