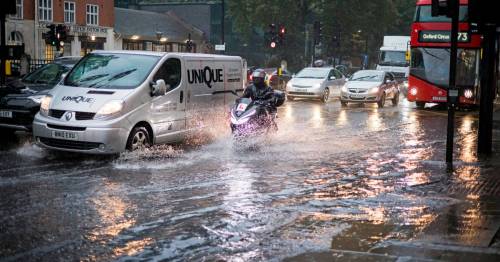 Torrential rain is battering the UK today with heavy downpours causing flooding in London with warnings of more to come.

Forecasters have warned Brits to brace for the possibility of flooding to homes and businesses as well as damage to some buildings as the rain sweeps in, with yellow weather warnings in place for much of England.

A huge swathe of the country will be lashed by torrential downpours throughout Tuesday, the Met Office warns, with up to 70mm of rain to fall.

The rain has been described as "biblical" by those getting stuck in it and shocking videos and footage show people struggling to wade through the rising water.

A severe weather warning for rain is in place from 6am today until just before midnight.

It covers much of the midlands, the north and parts of the south including London.

Got a story you think we should feature? Email us at webnews@mirror.co.uk

Iconic landmarks have been flooded
(

Commuters are wading through the downpour to get to work
(

Areas across London were flooded as torrential rain and flash floods hit the capital earlier today.

The weather has caused travel disruption for commuters who have only just returned to the office.

Videos and photographs show London in the wake of the rainfall, which has been heavy throughout the morning and is expected to cause problems across the country throughout today.

Flooding has so far affecting the North Circular, Tower Bridge and the District Line on the London Underground.

On the North Circular – one of the capital's busiest roads – motorists are being warned of delays as the challenging weather causes disruptions to people's routes.

One person tweeted: "A spec of rain and all London goes crazy and builds up traffic."

Another said: "What the hell is going on with the weather in London- There's floods..in London- that literally never happens."

The rainfall that battered London is expected to spread across the country later today.

Weather warnings have been put in place by the Met Office who are expecting the rain will slow down by Tuesday night.

The heaviest and most persistent rain is likely to be across parts of Yorkshire and Lincolnshire.

Sunny spells are not expected until later this week
(

Sunny spells are not expected until later this week but could bring another heatwave.

A spokesman for the Met Office said that today there will be "Outbreaks of heavy rain moving northeastwards across England. Turning warm and muggy as skies brighten across southern England and Wales with some heavy and perhaps thundery showers developing.

The yellow weather warning for rain has been put in place across the north east, midlands and south east of England. It is in place until 9pm on Tuesday.

A spokesman for the forecaster said: "Whilst many will see a wet day on Tuesday, there is the chance of very heavy rainfall for some, leading to disruption.