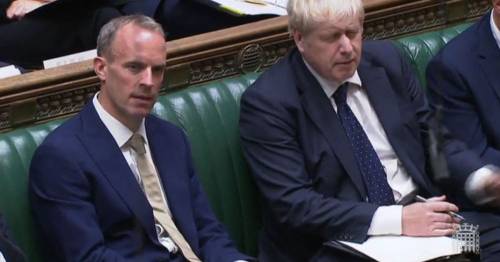 Dominic Raab has dismissed speculation that fed up Tories want to oust Boris Johnson after a string of blunders as "tittle tattle".

The Deputy Prime Minister insisted Mr Johnson was "on great form" and branded growing tensions within Tory ranks over the PM's position as "Westminster village" gossip.

Downing Street was forced to tell journalists that the "PM is well" following a chaotic speech to business leaders on Monday, where he lost his place, made care noises and rambled about a visit to Peppa Pig World.

The bizarre speech to the CBI came amid growing Tory unrest over the PM's decision-making, following the disastrous U-turn over plans to rip up standards rules to save Owen Paterson from sanction.

After weeks of headlines about Tory sleaze, MPs were also angered by broken promises on rail for the north and the surprise move to water down the cap on social care.

Rumours have started that letters of no confidence have been sent to the backbench 1922 Committee, which has the power to remove a Tory leader

If 15% of Conservative MPs send a letter then a leadership contest is triggered.

One report by The Sun claimed up to a dozen letters had been submitted, while others put the number at around one or two.

A Tory whip told the Telegraph: "There is an assumption someone has put in a letter. The rumour is persistently around.

"It will not get anywhere near the 50 letters you would need, but it does cause angst."

Mr Raab dismissed the suggestion that backbenchers were demanding a leadership challenge.

Asked about the reports, he told LBC: "No. There is the usual Westminster tittle tattle and I'm not aware of that.

"There will always be the scrutiny, the noisiness, that comes to British politics.

"Frankly, overwhelmingly – and I talk to colleagues, MPs on the back benches on all sides all the time – there is huge support for what we're doing and what the Prime Minister is doing."

In another interview, he told BBC Breakfast: "The Prime Minister is on great form.

"The reality is people speak about speeches in the Westminster village, the gossip and all the rest of it."

Tensions have been swirling between No10 and Chancellor Rishi Sunak's operation in No11 after the Treasury was blamed for an incendiary briefing to the BBC that "there is a lot of concern inside the building about the PM" and "it's just not working".

Allies of Mr Sunak denied the Treasury was involved in the briefing.

Mr Raab said: "It's the job of Westminster commentators to pick up on one anonymous source from wherever they found it to criticise the Government of the day, that's fine."