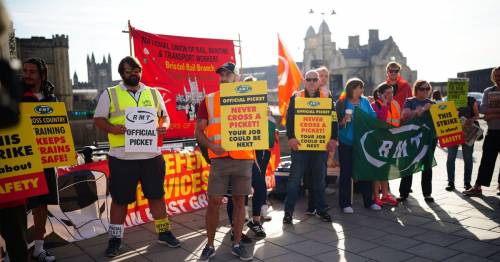 The Tories have been told it's "crazy" to increase state pensions in line with inflation while refusing to meet demands for pay hikes for millions of public sector workers.

The consumer prices index (CPI) measure of inflation rose to 9.1% in the 12 months to May – its highest level in 40 years – as cost of living pressures mount for Brits.

Ministers are locked in a battle with unions over demands for decent pay rises for public sector workers, with further strike action planned on the railways on Thursday and Saturday.

As more than 40,000 members of the RMT union took part in the first of several walkouts on Tuesday, ministers confirmed that the pensions triple lock – which increases the payout by the highest of 2.5%, average wages or inflation – will return in April.

Lord O'Neill told the Today programme: "It seems to me pensioners – given the pressures on fiscal policies and these inequalities issues now for the past decade and beyond – the constant protection of pensioners seems ludicrous in itself and in these circumstances, particularly crazy.

"I'm talking as someone who is getting on a bit."

The crossbench peer warned the country was in a "very fragile position", adding: "The Government needs – instead of jumping from one issue to another seemingly trying to pander to everyone's whim – needs to articulate an articulate and clear economic policy framework in my view, of which we do not have one."

Deputy Prime Minister Dominic Raab defended the decision for inflation matching pay rises for pensioners as he vowed to stand firm against union demands for a decent wage hike for workers.

Mr Raab told Today: "They (pensioners) are particularly vulnerable and they are disproportionately affected by the increase in energy costs which we know everyone is facing."

Lord Jim O'Neill, a former Treasury minister, accused the Government of not having an economic strategy
(

He said ministers have committed £37 billion to help people cope with rising costs but added: "At the same time we have got to stop making the problem worse by fuelling pay demands that will only see inflation stay higher for longer and that only hurts the poorest the worst".

In a round of interviews, Mr Raab insisted the Government should stand firm on pay restraint for public sector staff.

"We can't allow, I'm afraid, the unions, in this very militant way that they've proceeded, to win this argument because it will only hurt the poorest in our society," he said.

Downing Street has repeatedly said that pay rises for workers would make it harder to reduce inflation, which is expected to rise to 11% in the autumn.

The Justice Secretary said the strikes were "deeply regrettable" and reform was needed on the railways.

He added: "I think Network Rail are taking the right approach. We know that the cost of living challenge is there, we know that it affects workers across the board.

"But the one thing that will keep inflation higher for longer and undermine pay packets for longer is if we have spiralling public sector pay increases beyond what is responsible. And that's what's at issue here.

"It is precisely to protect the wages of those on the lowest incomes that we need to hold the line."