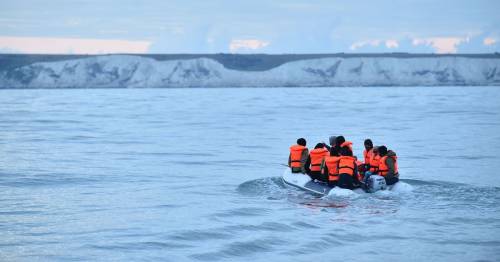 A Home Office Minister has failed to rule out hardline moves to push back dinghies to France – despite the tragic deaths of 27 people in the Channel.

In light of Wednesday's tragedy, Mr Foster was put under pressure over whether the UK Government would ever utilise its so-called "pushback" tactic.

He told the Today programme: "What we've said is that any maritime tactics would be deployed appropriately, bearing in mind the safety situation, and that would be determined by commanders on the ground."

The policy is understood to only be for use in extreme circumstances but campaigners have warned it is highly dangerous and potentially unlawful.

Home Secretary Priti Patel authorised the use of pushback tactics
(

A Whitehall source previously told the Mirror that the aim was to deter people from making the crossing, as passengers were already dying trying to reach the UK.

But Amnesty described attempts to intercept vessels as "incredibly high-risk", adding that to push people back will endanger their lives "which is totally at odds with the legal duty of rescue at sea".

Liberal Democrat Home Affairs Spokesperson Alistair Carmichael said: “It is disgraceful that the government is even considering pushing boats back in the Channel after yesterday’s tragic news.

"Priti Patel must immediately rule out these dangerous and cruel pushback tactics which don’t work and could cause yet more unnecessary deaths.

"The government’s incompetence and failure to get to grips with this crisis has led us to the heartbreaking situation we find ourselves in. Instead of yet more unworkable gimmicks, ministers must now focus on providing safe and legal routes to take refugees out of the grip of smugglers and traffickers.”

The Prime Minister's official spokesman said: "There are a number of operational capabilities that Border Force have.

"As I've said on a number of occasions, I wouldn't get into those operational tactics."

Ms Patel is due to speak to her French counterpart Gerard Darmanin this morning before updating MPs on efforts to stop people smugglers sending desperate migrants across the Dover Strait.

Mr Foster said "The Home Secretary will be speaking to her French counterpart later this morning.

"Obviously our heart goes out in terms of those who have lost their lives yesterday and their loved ones.

"As you know, at least 27 people have died but it is a dynamic situation, the French authorities are investigating and obviously we're keen to let them get on with their work and we've obviously offered any support we can give."

Tensions between France and Britain have been escalating, with a growing blame game over the crisis unfolding in the Channel.

Boris Johnson has urged Emmanuel Macron to agree to joint police patrols along coast, but France has so far resisted the call.

Dover MP Natalie Elphicke said: “Yesterday we saw footage of French police standing by while people got the boat ready, picked up the engine and took to the water on the French side.

"They did absolutely nothing. That's unacceptable and that's got to change.

"The British are standing by willing to put people to help, the EU I'm sure will come to the French's aid as well, this is a humanitarian crisis on the shores of France, these people smugglers must not be allowed to continue to ply their trade and put people's lives at risk in these wintry seas.

"It is vital that action's taken and the only way to do that is to stop people on the beaches of France from getting into the boats and turning them around quickly in French waters."

But Calais MP Pierre-Henri Dumont said: "I'm not sure that having more police officers or more materials on the French shore will help to stop these crossings because we have 200 or 300 kilometres of shore to monitor 24/7.

"It only takes five to 10 minutes to take a boat and put it at sea filled with migrants, so I'm not sure it is only a question of money and the number of men."

Charities stepped up calls for the Government to devise safe and legal routes to come to the UK.

"This has to be a time for our Government to mark a turning point, this tragedy must not be allowed to continue and that means changing our approach, not more of the same failed policies.

"We need to offer people alternatives to the smuggling boats.”

Previous : Army shake-up will send hundreds of vehicles to Germany as tensions with Russia mount
Next : New bill aims to finally let jurors speak about trauma of trials with medical professionals