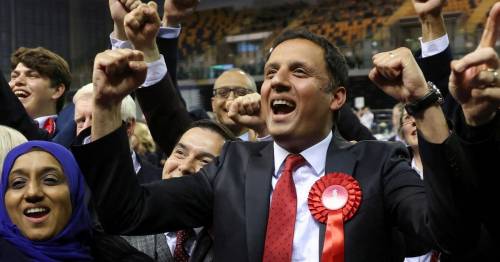 The Scottish Tory leader has blamed public anger over Partygate for a disastrous local election performance which saw the the party slump into third place.

Douglas Ross warned Boris Johnson "can't ignore the message" from voters after the Tories shed more than 60 councillors north of the border and sustained losses across the rest of Britain.

The SNP finished as the largest party in Scotland, with Labour jumping to second in a boost to the party's efforts to rebuild.

Speaking at a count in Moray, Mr Ross said: "It's been a difficult night and the results coming in today are very disappointing."

He pointed to gains in the North East, but warned that "many of our supporters decided to sit this one out, to protest and not cast their vote".

Asked if the PM should lead the Conservatives into the next general election, Mr Ross said: "The Prime Minister simply can't ignore the message that's been sent from voters not just here in Scotland , but across the UK.

"The Conservatives lost Westminster Council last night – that's a council that even in the peak Labour years under Tony Blair the party held on to – so there's been a very strong message from the public to the Prime Minister and to the party."

Mr Ross previously came under fire for U-turning on his call for the PM to quit over Partygate due to the Russian invasion of Ukraine.

The SNP increased its councillors to 454, an increase of 23, while Labour elected 281 candidates, a boost of 19.

Labour seized control of West Dunbartonshire council from the SNP but narrowly failed to overtake Nicola Sturgeon's party in Glasgow.

Jubilant Scottish Labour leader Anas Sarwar said "the Ruth Davidson project is dead" and warned "the nasty Tories are back".

"It's been almost a decade and it's the first time we've had a cheerful day for the Scottish Labour party," he said.

"It's a good day, we've made good progress. I think by the end of the day we will be in a good second both in terms of vote share and in terms of seats."

He added: "For well over a decade now, we've had a politics in Scotland where there's been one dominant party, and there's been a Labour party that's been not on the pitch, not been willing to compete, and a Conservative party whose limited ambition has been to come in second place."

"This is an astonishing result for the SNP and an absolutely brutal rejection of Boris Johnson and the Conservatives," she said.

Previous : Man who’s had raw sewage seep into home for a year says it’s ‘worse than being homeless’
Next : Tories lose control of only Welsh council after heavy local election losses