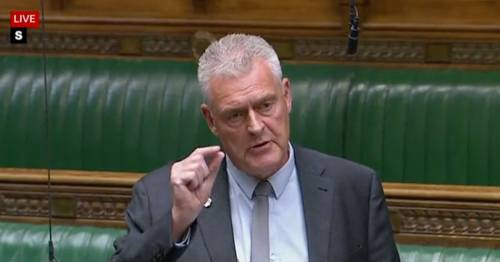 What do they know of need, these Tories bloated with greed? They don’t care. They don’t know how to. Ice fills their hearts.

That’s why Boris Johnson fumbled and faltered when the incisive Susanna Reid of Good Morning Britain told him about Elsie, the 77-year-old widow who sits on buses all day long to keep warm.

As Labour’s bright young MP Zarah Sultana tweeted: “Tories don’t have a clue what life is like for ordinary people.”

So, it is not at all surprising that the Queen’s speech had nothing to offer the millions facing the biggest drop in household incomes in 50 years at a time of soaring costs.

Gavin Barwell, Theresa May ’s former chief of staff, Tory to his toenails, says: “Both morally and politically the Government needs to do more.”

Adults and children are having to go without regular meals.

Eddie Crouch, chairman of the British Dental Association, warns that people are pulling out their own teeth because the number of NHS dentists has plummeted.

A group of more than 550 foodbanks across Britain has warned PM Boris Johnson and Chancellor Rishi Sunak that they are close to “breaking point”. The numbers using some foodbanks has doubled since last year. Many users are the working poor. Like Charles, 33, who works in a restaurant as a kitchen cleaner during the week and cleans cars at weekends in a mall. His wife has just had a baby. He tells me his hair turned grey suddenly this year because he’s so worried about not being able to provide for his family.

I met Tanya this Monday in a pharmacy. She didn’t have money to pay for soap or shampoo. A shopper took pity and paid. I told this story to an acquaintance who votes Tory. His response? “Why not use washing-up liquid. If you can’t afford it, you can’t have it.”

Penny Keevil is a manager at Second Chance Medway in Kent. They send food parcels to people experiencing extreme hardship. She says: “It’s the worst poverty I’ve seen in 30 years… People are coming to us in tears and saying, ‘It’s either I pay bills or feed the kids.’ And I say, ‘You pay the bills and we’ll feed the kids’.”

And yet Lee Anderson, the Tory MP, opines that food banks would not be needed if the poor learned to cook and budget properly. Sickening and predictable.

The Tories have been raised to disdain poverty and look after the rich. Our taxes pay their heating costs, hospitality bills, taxi fares, and any coffee or croissant they may have while carrying out their parliamentary duties.

Not one of them has said they will not take these expenses when so many are struggling.

Long ago, my ex-husband worked at Radley College, a public school with boarders. The young ones were sweet, normal. But the parents and school turned them into hard, self-centred, emotionally frosty people.

As I said, ice fills their hearts. And nothing will melt it.

Previous : ‘Boris Johnson is happy for others to be made redundant if he keeps his job’ – Voice of the Mirror
Next : Vogue admits it was wrong to threaten to sue pub of same name