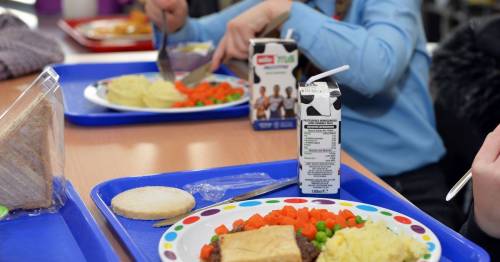 Universal free school meal funding for the youngest children will rise by just 7p per pupil, in a move branded "pathetic" by critics.

All children in Reception, Year 1 and Year 2 are entitled to free school meals in England, while older pupils qualify if their families get certain benefits.

Schools will now be able to spend £2.41 per meal for infants backdated to April, a rise of 7p on last year.

He said: “We are increasing our funding for universal infant free school meals because we know that more can be done in the face of rising costs."

But teaching unions warned that the below-inflation rise was not enough in the face of spiralling costs.

Dr Patrick Roach, General Secretary of the NASUWT union, said: “We have been calling for the expansion of free schools meals funding and eligibility and therefore this announcement is welcome.

“However, it does not go nearly far enough to meet the significant and rapidly growing number of children and young people of all ages who are in need of help to ensure they do not go hungry."

He warned that "many more pupils risk having their health and welfare damaged" if the government fails to expand free school meal eligibility.

James Bowen, Director of Policy at NAHT, said teachers were reporting seeing more and more families struggle to afford the basics – and schools were also battling with rising energy bills and mounting pressures on their budgets.

He said: "It has been clear for some time that the funding for universal infant free school meals is inadequate and we know that schools and caterers have been finding it increasingly difficult to provide healthy, balanced meals with the £2.34 they receive from the government for each meal they provide.

"The news that the government is increasing this figure is obviously welcome, but an extra 7p per day is simply not enough to cover the increased costs schools are facing."

Shadow Schools Minister Stephen Morgan said: "This government is once again asking schools and providers to do more with less.

"As costs soar, funding of just 7 pence extra a meal is pathetic and will do little to ensure children are getting a healthy, balanced meal."

It comes after Boris Johnson's food tsar Henry Dimbleby hit out at the Government for rejecting his call to wider eligibility to almost a million more kids on Universal Credit.

He told BBC Radio 4’s Today programme: “It’s impossible to say that that is not required at this stage.”

Teaching unions and campaigners have also called for free school meal eligibility to be expanded to all kids from families on Universal Credit.

Children in Year 3 and above can only get free school meals if their annual income is less than £7,400 without including benefits.

The uplift to infant meals funding was announced as supermarkets and sports organisations said they would support poorer pupils across the country this summer in partnership with the £200million-a-year Holiday Activities and Food programme.

The scheme was launched after footballer Marcus Rashford shamed the Government into acting to help families struggling with holiday hunger during the pandemic.