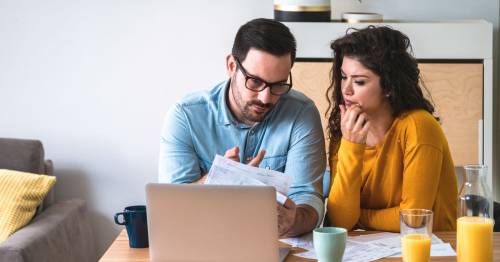 Rishi Sunak's planned minimum wage increase will only benefit some workers by £250 next year – rather than £1,000 promised by the Treasury, according to a respected economist.

The Chancellor will announce plans to hike the National Living Wage from £8.91 per hour to £9.50 for people over 23 from April in Wednesday's Budget.

The 59p hourly boost will mean a full-time worker on the living wage will get a pay rise of more than £1,000 per year, the Treasury claimed.

But Paul Johnson, director of the Institute for Fiscal Studies, said this was "obviously not true" due to the recent Universal Credit cut, looming tax rises, and rising inflation.

Paul Johnson, Director of the Institute for Fiscal Studies
(

"Anyone on UC will lose much more than half of that. Lots of people on UC are not on NLW. "

He added: "A full time worker on minimum wage and on universal credit would gain about £250 a year from the increase in the NLW. Worth having. But not £1000."

Asked if that was misleading due to the IFS analysis, the spokesman said the government “recognise it will depend on individual circumstances and what benefits and otherwise they might be receiving at the time.

"But clearly it is good that people will be able to see an increase in their take-home pay.”

Labour blasted the "underwhelming offer" which it said would mostly be swallowed up by benefit cuts, rising energy bills and hikes to national insurance contributions.

Analysis by the party found a single parent with two children who receives Universal Credit would be £807 worse off if the wage hike comes alongside the £20-a-week UC cut, a freeze in the personal allowance, and the planned 13.25% national insurance rise – compared to keeping the £8.91 minimum wage but scrapping the tax rise and the UC cut.

Shadow Treasury Secretary Bridget Phillipson said: “This underwhelming offer works out at £1,000 a year less than Labour’s existing plans for a minimum wage of at least £10 per hour for people working full-time.

"Much of it will be swallowed up by the Government’s tax rises, universal credit cuts and failure to get a grip on energy bills.

"It will in no way make up for the cut to the Universal Credit uplift, with a lone parent on the minimum wage affected by this cut, the rise in National Insurance and the freeze in income tax personal allowance still £807 worse off from April.

"And that's even before taking into account the likely rises in gas and electricity prices when the cap goes up in April next year."

Poverty campaigners also warned the minimum wage increase would not mitigate the pressures on family finances.

Sara Ogilvie, Director of Policy at Child Poverty Action Group, said: "The minimum wage increase is welcome but it doesn’t compensate for the universal credit cut which has hit both working families and those who cannot work, leaving millions horribly exposed to rising prices and higher National Insurance.

"Hard-pressed households need a package of support to prevent them from being pulled into poverty.

"The Chancellor’s Spending Review must build on the minimum wage rise by restoring the value of children’s benefits, boosting help with childcare costs and widening eligibility for free school meals."

But Mr Sunak insisted his party was on the side of working people.

Announcing the move, he said: "This wage boost ensures we’re making work pay and keeps us on track to meet our target to end low pay by the end of this Parliament."