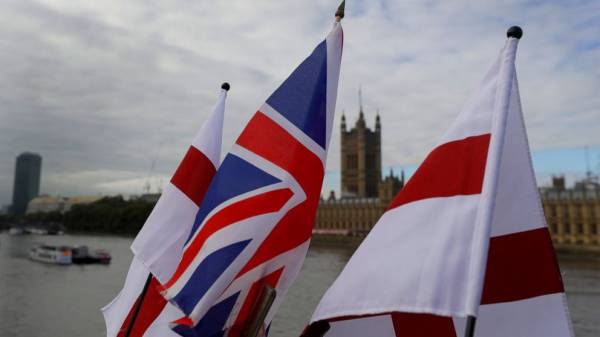 LONDON — The U.K.’s most senior Anglican bishops warned Monday that legislation breaching part of the Brexit divorce agreement the government signed with the European Union will set a “disastrous precedent” and could undermine peace in Northern Ireland.

The top archbishops in England, Scotland, Wales and Northern Ireland condemned the Internal Market Bill in a letter published in the Financial Times.

They said the bill “asks the country’s highest law-making body to equip a government minister to break international law. This has enormous moral, as well as political and legal, consequences.”

“We believe this would create a disastrous precedent,” said the letter, signed by Archbishop of Canterbury Justin Welby, who heads the Church of England, and four other archbishops.

“If carefully negotiated terms are not honored and laws can be ‘legally’ broken, on what foundations does our democracy stand?” they asked.

The Internal Market Bill has been approved by the House of Commons and begins its passage through the House of Lords on Monday. It is likely to face strong opposition in Parliament’s upper chamber, where the governing Conservative Party does not have a majority.

The bill has triggered a crisis of trust between Britain and the EU, who have been attempting to strike a new trade deal since the U.K. left the bloc on Jan. 31.

If passed, the bill will allow the British government to override parts of the legally binding Brexit withdrawal agreement relating to trade with Northern Ireland, the only part of the U.K. to share a border with the EU.

British Prime Minister Boris Johnson’s government says it needs the legislation as an insurance policy in case the EU behaves unreasonably after a post-Brexit transition period ends on Dec. 31 and tries to impede the flow of goods between Northern Ireland and the rest of the U.K.

The bloc sees it as a flagrant breach of an international treaty that could undermine the delicate foundations of Northern Ireland’s peace settlement, created by the 1998 Good Friday accord.

The bill soured talks aimed at securing a new trade deal between Britain and the EU before the post-Brexit transition period ends. Those talks appeared to break down last week, with each side calling for the other to shift its policies to secure a deal. The EU said it was happy to keep talking, but the British government said the talks were over unless there was a “fundamental” shift from the bloc.

Despite that hard line, Britain’s Brexit preparations minister, Michael Gove, said the door to talks was “still ajar.” The two sides’ chief negotiators, Michel Barnier for the EU and David Frost for the U.K., are expected to speak by phone Monday to see whether progress can be made.