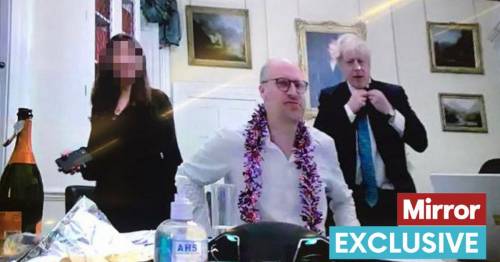 A senior Boris Johnson aide who was seen draped in tinsel at the Partygate Christmas quiz has left his Number 10 job, the Sunday Mirror has learned.

And police have started to hand out fines to No10 staff over a separate Christmas party held the same week.

Stuart Glassborow was the Prime Minister’s deputy Principal Private Secretary – among the highest ranking civil servants in Number 10 – and was named among those expected to be ousted as Mr Johnson battled to save his skin.

He left the top job on Friday, inviting colleagues to join him for “tea and cake” to mark his departure.

It’s understood Mr Glassborow is taking “extended leave over the Summer” before moving on to his next role.

He will be required to consult revolving door watchdog Acoba if he plans to accept a job outside of Government – and has to wait at least three months before starting any new private sector role.

The Mirror published a photograph of two members of staff – one of whom was Mr Glassborow – alongside Mr Johnson and a bottle of bubbly during the quiz.

A number of staff took part in the quiz in person, despite claims it was an ‘online’ event.

A source said Mr Glassborow was not leaving because of Partygate, but because he wanted to do something new.

After the picture was revealed, Scotland Yard said they would consider investigating the quiz, held on December 15 2020 while indoor mixing was banned.

The raucous Christmas party, first revealed by the Mirror, was said to have been attended by 40 of the Prime Minister’s top team.

Downing Street dodged questions for a week before bombshell video emerged of staff joking about it.

Officials knocked back glasses of wine and held a Secret Santa while the rest of the country was forced to stay at home.

According to later reports, people made speeches and stayed until 2am, with Boris Johnson not present but working a few rooms away in his office.

“It was a Covid nightmare,” one source told the Mirror.

Mr Johnson claimed in the Commons that all guidance was followed, but a video emerged of a mock press conference in which press secretary Allegra Stratton joked about the knees-up and the lack of social distancing. She later resigned.

Number 10 declined to comment, other than to confirm the Prime Minister has not received any further fines at this time.