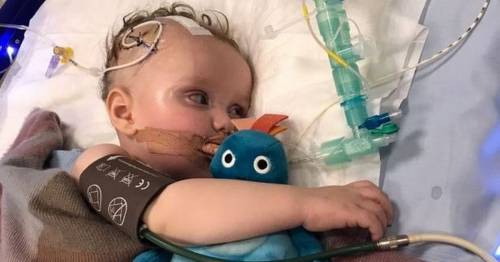 A young boy with an incurable brain tumour has been escorted home to die by nearly 100 kindhearted bikers.

Some of the motorcyclist had driven 400 miles just to accompany three-year-old William Horne and his parents from Noah's Ark Children's Hospital in Cardiff to the family home in Pontypridd, Wales.

The toddler's dad Tom Horne is a member of Silurians Motorcycle Club and because his son always enjoyed watching the bikes he thought he'd see if any of his biker "brothers" would be keen to escort the boy on his final journey.

After posting a call out on social media, Tom was amazed by the reaction.

He told Wales Online: "I thought a couple of my brothers who weren't working would come down and give him a bit of an escort home. William always enjoyed seeing and hearing the lads from the window outside our house," he explained.

"Obviously my call got traction and all the other clubs picked up on it. We ended up having close to 100 bikes there. They just kept coming.

Members from motorcycle clubs across England and Wales turned up
(

"Some of them had ridden 400 miles from England to get to us. It was totally mind-blowing for me and just an incredibly moving moment. The support from Outlaws MC, Valley Commandos MC and myfellow brothers at Silurians MC has been unreal."

The family hit headlines in 2019 when William's parents refused chemotherapy and radiotherapy treatment – which doctors said could prolong his life two or three years – in favour of cannabis oil. Tom says the oil helped stop the tumour growing for 18 months.

William, who was described by his family as a "bouncy, happy" baby, become unwell just after his first birthday with cold-like symptoms and an upset stomach. He then started to develop a crooked neck and his condition deteriorated to the point where he needed a trip to the Royal Glamorgan Hospital in Llantrisant. Within hours a CT scan was carried out which revealed a fast-growing cancerous brain tumour known as anaplastic ependymoma.

William has endured a long battle with cancer
(

William was then transferred to the Noah's Ark Children's Hospital for Wales where he underwent two urgent operations to remove 85% of the grapefruit-sized growth. However, a biopsy confirmed it was classed as stage three which meant it was located in both his brain and spine.

To his parents' horror, William was given a life expectancy of three months, which doctors said would be extended by around three years should he be given radiotherapy. However, the family refused it in favour of other treatments.

"It's impossible to explain the emotional pain you feel in a moment like that. No words can do it justice. All I wanted to do was hold William and not let go but I was scared of hurting him or dislodging the tubes and machines he was connected to," said his mother Kylie.

"He didn't look like our William – he was attached to a ventilator and still completely sedated. My overwhelming emotion was one of complete panic that just wouldn't go away."

Dad Tom also recalled: "The gravity of the situation was monumental. I'd never felt anything like it. It was like the news blew all emotion out of me. I felt like a blank sheet of paper."

The surgery left William unable to suck, swallow, talk, move his left side or open his eyes properly. But Kylie added: "We knew straight away that he was still in there somewhere. William had always had a strange obsession with belly buttons and after the operation he instinctively reached for his own. It's a tiny thing but it gave us hope."

Some of the members rode 400 miles to join the escort
(

As the weeks went by Tom and Kylie started adapting to the "new version of William" and he made some small improvements in his communication. "Slowly he became more alert and learnt to communicate the difference between happy and sad – a body wiggle for happy and the drop of the lip for sad," Kylie added.

For the first nine months of the Covid pandemic, the family made the decision to live in a campervan on the grounds of the University Hospital of Wales so they could be as close to William as possible during his treatment. "There was me, Kylie and the four kids – we even spent a Christmas in there," Tom added.

The clutch went on the camper so we were stuck outside the dialysis unit. Every two days I had to walk down to Tesco with Jerry cans to pour diesel into to run the engines. It was pretty hardcore at the time, but we just did what we could to stay together as a family. We finished a lot of jigsaws, and I had USB chargers in all the bunks so we spent a lot of time watching movies in there on a tiny TV."

Instead of radiotherapy, the family chose to use cannabis oil to help William – and for 18 months his tumour didn't grow. "We held it in limbo when we constantly escalated the dose of cannabis oil we were giving him, but then we decided to plateau the amount of oil. It allowed the tumour to grow and break through to the point that nothing can now be done for it.

We should have kept escalating the dosage and we're paying the price for that now. But we managed to give him two years of good quality life with his family," Tom added.

Now William has lost all mobility and can only move his eyes. Staff at the children's hospital said the best thing to do now is to send him home and let the family enjoy the short time they have left with him. On May 9 an ambulance took William, Tom and Kylie back to their home in Pontypridd, accompanied by the huge convoy of motorcyclists.

Tom added: "I'm very proud of William and how strong he's been, but watching his frustration at not being able to move is just heart-breaking."

Previous : ‘Vision of Hell’ caught in video of severe tornado storm as lightning flashes overhead
Next : Nurse discovers she has cancer after brushing off lump during pregnancy as a cyst