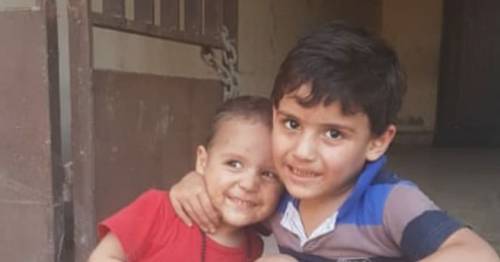 A grandad has been left heartbroken as the Home Office rejected his request to be reunited with his grandson, months after the child died.

Nidal Ali Al Naboulssi, 57, found a new home in Kirkintilloch, East Dunbartonshire, in 2017 after fleeing the war in Syria via Lebanon.

He had hoped his daughter and her two sons would be able to join him from Lebanon, where she married a fellow Syrian refugee.

Mr Al Naboulssi submitted an application to the Home Office to request for the family to reunite on compassionate grounds.

However, while he was waiting for an answer, his younger grandson Mohamad died on April 1 at the age of three.

The grandad never had the chance to meet the little boy and Mr Al Naboulssi said that when the document refusing the application arrived in June it included a refusal for the youngster, which "made us cry more".

Mr Al Naboulssi said: "When we got the letter from the Home Office, my wife and I were heartbroken. Our wound was reopened when we saw the refusal for Mohamad, the one who passed away.

"The Home Office were made aware that he had passed away since the time we made the application, but they still sent us a refusal letter.

"This made us cry more. Even though he is dead he has been refused."

The man added: "My first grandchild was around a year-and-a-half at the time we left for Scotland. He had just started speaking, and he would say 'Grandaddy, I love you.' He's five now and I miss him a lot.

"We spoke only on WhatsApp phone calls and video. When we received the bad news that his heart had stopped, I couldn't speak."

Commenting on the document received by the Home Office, he said: "We thought the UK was a place where human rights were respected. How could they send us a document like that?"

Mr Al Naboulssi and his family crossed the border from Syria to Lebanon in 2012, after bombing and air strikes left them fearing for their lives.

In Lebanon, where roughly half of all school-age Syrian refugees do not have access to education, Mr Al Naboulssi struggled to find a school that would enrol his eldest daughter Battoul, who is now aged 25.

Unable to continue her studies, she married a fellow Syrian refugee.

With little chance of rebuilding their lives in Lebanon, Mr Al Naboulssi and his daughter both registered with the United Nations refugee programme.

The family was later offered resettlement in Scotland, however, because his daughter had become part of a separate household, she was not included.

Mr Al Naboulssi is now calling on the Home Office to allow his daughter, her surviving child Ahmad and her husband Wael Almikdad to join the family in Scotland.

His constituency's MP Stuart McDonald said: "The circumstances around the enforced separation of Mr Naboulissi and his family are truly heart-breaking.

"I have long criticised the UK's family reunion rules as too harsh and restrictive, but even I am appalled that this case isn't considered exceptional, or the circumstances compassionate enough to justify allowing the family to be reunited.

"I really hope someone in the Home Office will see sense and allow this family to come together to rebuild their lives."

Mr Al Naboulssi's lawyer, Usman Aslam of Rea Law, said: "Family reunion really is not a big ask. It is a route to safety, but more importantly it is a legitimate way for those separated by war and persecution to be reunited again."

The Mirror has contacted the Home Office for comment.

Previous : Man dies after passers-by desperately try and save people struggling in the water
Next : Neo-Nazi who carved swastika into girlfriend’s bum is jailed for seven years