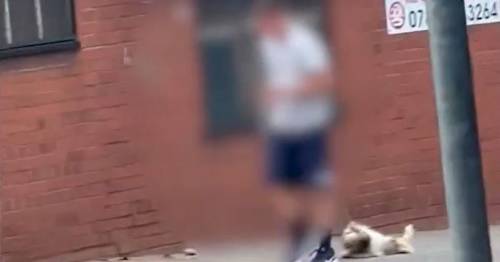 The RSPCA has launched an investigation after a man was filmed dragging a dog down the street.

The shocking footage was taken by a passerby and has been shared widely on social media. It shows the dog owner nonchalantly pulling a little Shih Tzu along a street in Stoke-on-Trent after it refused to get up, reported Stoke-on-Trent Live.

The clip showed the man pulling the helpless dog down the street for several metres.

Sharing the video on Facebook, the woman who witnessed the incident asked her followers to report the owner if they knew him.

"So I’ve just witnessed someone dragging their dog up the bank, I tried to video as much as I can, if anyone knows this man please can you report him or let someone know that the dog is ok?!?!" she wrote.

"I did shout out my car window to tell him to pick the dog up but he literally told me to f off."

The man was spotted pulling the defenceless dog along the pavement
(

Staffordshire Police said they are seeking to identify the man in the clip and the RSPCA has launched its own investigation.

A spokesman for Staffordshire Police said: "Officers were notified of a video circulating on social media on Saturday whereby a man was recorded being cruel to a dog on Duncalf Street in Burslem.

"The man, who is described as white and was wearing a grey short sleeve t-shirt, black Nike trainers, black socks and navy knee-length Adidas shorts, was seen dragging a suspected Shih Tzu dog along the pavement. The video was referred to the RSPCA who are investigating."

The RSPCA is asking that anyone who recognises the person should get in touch immediately.

A spokesman said: "The RSPCA is aware of this and would urge anyone with any further information on this to contact us on 0300 1234 999. We rely on members of the public to be our eyes and ears and we are very grateful to anyone who reports any concerns to us.”