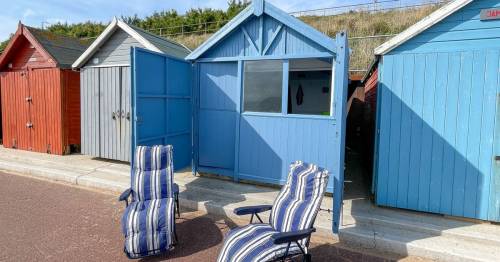 The wooden cabin’s owners, who have owned it for 20 years, have decided to cash in on it due to the increasing demand from staycationers.

Whilst the hut has no running water or electricity, it does have uninterrupted sea views and immediate access to a sandy beach.

Hut C4, measuring in at 96sq ft, is situated on the sought-after Avenues section of Marine Parade. Huts in the area tend not to change hands for several decades.

Very few beach huts came on sale during 2020 and 2021, since owners chose to keep hold of them with the lack of foreign holidays due to coronavirus lockdowns.

Above the beach huts.
(

There are about 450 huts in the Clacton area of the Tendring Peninsula. The area was part of a £35m regeneration scheme in 2015, which included 23 new bay beaches formed to the east of Clacton pier, creating lots of sandy beaches.

The new owner of the hut would also be required to pay an annual licence fee to the local council, which is about £266 for local residents and £530 for non-residents.

James Eniffer, from estate agents Sheen's, who are selling the hut, said: "The majority of huts in this area are in a single row directly facing onto the promenade where you can step straight onto the sandy beach.

"The huts do not have facilities connected, however there are public toilets, cafes and several water taps located along the sea front close by.

"Each hut is unique, with vendors having fitted them out differently, but most have some storage or kitchen style units.

"The owners have had this hut for around 20 years, and the owners before that having it for nearly 37 years. They tend to stay in the family for a generation or two.

"We saw very few come up for sale in the Clacton/Holland area in 2020 as most owners were so keen to keep hold of them during the first lockdown.

"With the shutdown on foreign holidays, demand for the British seaside holiday went through the roof.

"We saw many people prepared to pay good figures to secure themselves a beach hut which was their own to share with friends and family members.

"It is often a long term investment with many families holding onto their hut for over 20 years.

"Although the prices may seem high now they are always retained as an asset which can always be sold later on, so many see them as a good investment for themselves and their families to enjoy for years."