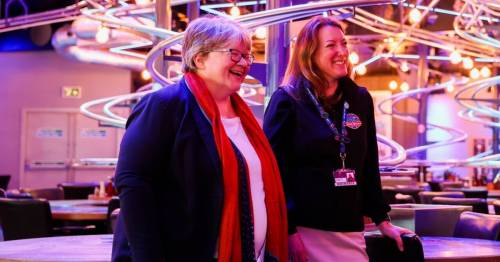 The thrill-seeking Tory benefits chief today went straight from a rollercoaster ride to crisis talks on the cost of living.

Therese Coffey enjoyed a “jolly day out” to Alton Towers – which happens to be owned by a Tory donor – to trumpet a new “partnership” with the DWP.

The Work and Pensions Secretary toured the aquarium, rode on the new Wicker Man rollercoaster with aides and met staff.

She then took a 15-mile trip to Stoke-on-Trent for a Cabinet away day on skyrocketing bills – which ended in no new help for families.

Downing Street hinted it could take until August for a new announcement to help millions of Brits struggling with spiralling inflation.

It comes seven months after Ms Coffey was accused of an “insult” by singing ‘The Time of My Life’ within hours of a £20 Universal Credit cut.

And in 2020 she came under fire from Marcus Rashford after replying to his poverty campaign with the words: “Water cannot be disconnected though."

The DWP said today’s visit was to promote 300 vacancies at the resort, which Universal Credit claimants could take under the Way to Work Scheme.

But Shadow Future of Work Minister Justin Madders said: “Families and pensioners struggling to make ends meet will wonder why the Minister responsible for ending poverty is enjoying a jolly day out on the taxpayer.

“Does she think her job is done?

“As far as I can tell at Cabinet this morning Ministers came up with no solutions.

“She should be straight back to the drawing board with an emergency budget to answer the crisis facing families up and down the country."

Boris Johnson also appeared to have a fun time before the Cabinet summit when he visited Churchill China in Tunstall, Stoke-on-Trent.

He told ministers: “The job they gave me was to see if I could break the china. And I hit it hard repeatedly with a wooden mallet, it wouldn’t break!”

The DWP issued a gushing 662-word, taxpayer-funded press release on Ms Coffey’s visit, where she met staff hired through Jobcentres.

The promotional message recited the words ‘Alton Towers’ 11 times and highlighted how it was the “ideal first step” into work.

The karaoke-loving minister riffed on ride names, saying employment “is far from your Nemesis” and “we’re putting The Smilers back on people’s faces”.

She said: “We know the last couple of years have been a bit of a rollercoaster ride, but thanks to partnerships like this one with Alton Towers getting back into work is far from your Nemesis.

"We're putting The Smilers back on people's faces by helping forward-thinking businesses tap into the talents of job-ready claimants to fill vacancies."

Mr Leslau – whose stake is held through Prestbury Investments – is the sole director of Yoginvest Ltd, which donated £20,000 to the Tories in 2019.

But in 2020 he hit out after the government banned commercial evictions, to spare struggling shops being turfed out by Covid.

He told The Times: "I think the flippancy with which the property industry has been treated has been narrow-minded.”

Tory donor and Alton Towers owner Nick Leslau told the Mirror: “Neither I nor any of my colleagues have had anything directly, nor indirectly, to do with this event."

He added: “We had no knowledge of the event and, as Merlin have exclusive operational control of the park for the next fifty five years, nor would we expect to.”

The Way to Work campaign has been aiming to find jobs for 500,000 Universal Credit claimants by the end of June.

Benefit claimants face being sanctioned more quickly if they refuse a job that is outside their usual area of expertise.

Alton Towers HR director Jo Mountney said the resort was “the ideal first-step into an exciting and rewarding career.”

In a release issued by the DWP, she said: “As part of a successful British company, Merlin now has over 140 attractions globally, offering the ideal springboard for those who are eager to find employment and training opportunities which could start a rollercoaster ride into a long-term career!”