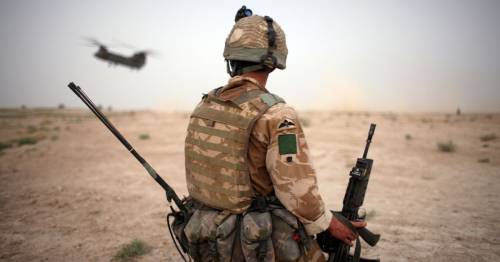 Thousands of veterans are struggling to get government payouts for injuries caused in service, with some facing poverty and suicide over the issue.

These veterans overwhelmingly report the same things – not getting the level of payment they need and then facing lengthy and complex battles to get an increase.

Those who were physically or mentally harmed during service before April 6 2005 can apply for war pension payments. After that point they must go to the AFCS .

Both assessment processes and payments are handled by Veterans UK, part of the Ministry of Defence (MOD).

Are you a veteran struggling to get the payments you deserve? The Mirror wants to hear your story. Message sam.barker@reachplc.com

But injured veterans say getting what they are owed can be almost impossible in practice.

The Mirror has spoken to several former members of the armed forces who say they feel betrayed by a payment system that should work in their favour but instead works against them.

"I've been overwhelmed at the scale of it," he said. "The moral position is there is a sacred and unbreakable duty of care indebted to these veterans."

He said most former members of the forces joined up to serve their country, but that once they get injured and need help they feel the government treats them as a nuisance.

House is now chief executive of Justice4Troops, an organisation which helps members of the armed forces with serious issues like this.

If veterans are unhappy with their war pension or AFCS payment, they can appeal. But for many the appeal process is complicated and long.

One veteran who is fighting to get the right war pension is Charles Stuart, who left the RAF in 1995.

He was injured in 1991 when an oil drum fell on him, causing severe headaches and damage to his neck leaving him bedridden after work for six months.

He was denied proper medical care and diagnosis for six months, and then a delay for a further 18 months to see a proper spinal expert, who offered him surgery.

Stuart said: "I've had the camp doctor tell me my pain was all in my mind.

"So the scan was deferred, as it often is when lower ranks complain, because of the cost.

"It's not just the unfair war pensions system that needs reform, the service complaints system needs reform too," he added.

He has also suffered bad mental health as a result of his injury and lack of treatment.

Stuart now has issues with his war pension after finding out, last year, that documents were withheld from him by the Department of Social Security (DSS) before a 2002 tribunal.

The DSS ran the war pension scheme at that time, before the MOD took it over.

Many former soldiers also report that vital medical evidence proving their claims is removed by the time their appeals are heard.

House says this happens in almost every case he sees.

He thinks the MOD relies on the appeals process being difficult.

Veterans will often give up on the system or – tragically – die before they get any payment increase.

"Their purpose is to time out or strike out," House said.

"Some of these veterans have put their lives on the line. The last thing they expect is for the state to challenge their records."

In Stuart's case, important missing evidence included a statement from a DSS doctor in 1994 that said Stuart "functions as would an elderly person with severe degenerative changes of the cervical spines".

He added that the complexities of the system when veterans appeal can affect their mental health.

He said: "These are the people that are vulnerable to suicide. You're knocked back by your former employer, who you gave your all to."

One veteran who died by suicide after struggles with his war pension was one of Stuart's friends and colleagues in the RAF, William Barr.

Barr was also injured in service and struggled to get the right war pension.

After leaving the RAF with a back injury, Barr struggled with work and everyday life and fell into debt.

He was forced to sell his possessions to get by, and ended up homeless .

Stuart said he tried to find Barr for two years before his death, but that he had disowned his family due to poor mental health and had gone missing.

Barr died by suicide in 2010 after changing his name to Liam Fraser.

The last letter he wrote before he died mentioned problems with war pension payments, which had stopped roughly two months beforehand.

It also mentioned how he had been treated during his service.

The Mirror also spoke to a 47-year-old veteran of the Royal Scots regiment, who wants to stay anonymous.

The veteran, who served in the conflict in Northern Ireland, gets a small war pension for a bad back and post-traumatic stress disorder (PTSD) from carrying heavy backpacks and the trauma of The Troubles.

He is now fighting to get an increase because he needs a new knee, has bad hips and has had worsening PTSD, including suicidal thoughts.

A doctor has signed him off work for life, but he says an MOD assessor told him he is fit to work.

"My body's crumbling, I can't even go to the pub for a pint or play football with my kids," he said. "If I didn't have my girls, I'd be dead. The thing that's driving me on is to prove these people wrong."

When the soldier took Veterans UK to a tribunal over his war pension he said they missed off 1,500 pages of paperwork from his evidence bundle.

These include the original Army medical report saying he had hip issues in service and excusing him from most activities.

"These cases can be like War and Peace multiplied by five," House explained.

House has tried alerting MPs to the issue, including sending evidence to the House of Commons Select Committee, but it was brushed aside.

Another Army veteran, 54, says he developed PTSD after two tours in Northern Ireland during The Troubles.

In 1993 he got a war pension based on hearing loss from gunfire, as well as an ankle injury.

When he got a PTSD diagnosis in 2020 he tried to get his war pension increased.

He said Veterans UK said no, so he appealed, and was offered a small increase, which he also appealed.

He said many soldiers would not even get that far, as the process was stressful and brought back bad memories for many of them.

"The average soldier will not mount this sort of claim or legal challenge," he said. "It's re-triggering for a lot of them. You feel like you're banging your head against a brick wall."

He also says the MOD left vital evidence out of his bundle when going through the appeal process.

The Mirror has also spoken to an Army officer with 25 years of service.

He was diagnosed with PTSD in 2013 after being deployed to conflicts in Bosnia, Iraq and Afghanistan.

He gets a small amount in AFCS payments but has been waiting for six years to get an increase, using evidence from a medical consultant.

He is now waiting for a tribunal decision on the issue.

In November 2018 he felt so ill he attempted suicide.

He said: "Veterans UK will seek to strangle you with your own mental health rather than pay entitled fair compensation that matches a consultant's prognosis."

An MOD spokesperson said: “MOD Veterans UK staff work hard to process applications under the Armed Forces Compensation Scheme, ensuring that former and serving personnel who suffer as a result of their service receive the compensation they deserve.

“Work is ongoing to ensure that applicants are given the right support with their application and we apologise for any inconvenience caused to individuals.

"Whilst we cannot comment on individual cases, we encourage anyone with concerns to get in touch with Veterans UK for further assistance.”

Previous : Martin Lewis on how to get a £1,200 bonus if you claim Universal Credit
Next : Nicola Sturgeon vows to stay in office until 2026 – ‘I’m going to be around a lot longer’