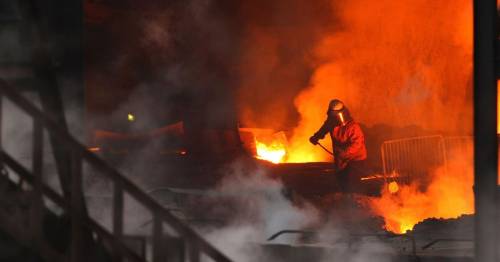 The party identified the lost roles in businesses which consume vast amounts of energy, as the power price crisis intensifies.

It said ‘Red Wall’ constituencies – those which the Tories won from Labour at the 2019 general election – were particularly vulnerable because they were home to a disproportionate number of energy-intensive firms.

They account for double the number of jobs in Red Wall seats as in the rest of the country.

Shadow Business Secretary Jonathan Reynolds said: “A decade of failure from the Conservatives has created a broken energy market and left some of Britain’s great industries at risk.

“Labour has a fully-funded plan to safeguard consumers and businesses from this crisis including investing £600million to support struggling firms – and fixing the broken energy market.”

According to Labour analysis of the Business Register and Employment Survey by Nomis, provided by the Office for National Statistics, thousands of jobs were lost in heavy industry from 2017 to 2020, including:

Under the party’s plan, a contingency fund would be created to support struggling firms through the energy price crisis.

It would be funded by a one-off windfall tax on the profits of North Sea oil and gas companies.

The Mirror told in November how Labour accused the Tories of “selling out” heavy industry amid soaring energy bills.

Research showed 60% of the 415,000 British jobs in “energy intensive industries” are in Red Wall heartlands in the North and Midlands.

A Government spokesman said: “We remain absolutely determined to secure a competitive future for our energy intensive industries and in recent years have provided them with extensive support, including more than £2bn to help with the costs of energy and to protect jobs.

Kwasi Kwarteng is Secretary of State for Business, Energy and Industrial Strategy
(

“Ministers and officials continue to engage constructively and regularly with industry to understand and to help mitigate the impacts of high global gas prices.
“Our priority is to ensure costs are managed and supplies of energy are maintained.”