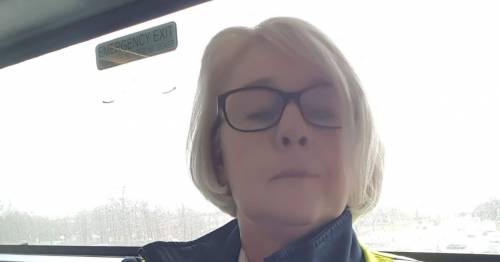 Support is growing for a 5ft bus driver who was fired after 34 years of work – because she's too small.

More than 26,000 people have signed a petition to have Tracey Scholes reinstated to her job, after she was dismissed for not being tall enough.

The 57-year-old became Manchester’s first and only female bus driver in 1987.

She's continually driven Brits around in the decades since, but recently lost her job because she lacks the “capability” to drive the new model of bus used on her route.

Bosses at Go North West said that, at 1.52m (5ft) tall, Tracey is too small for the vehicles due to the change in position of the wing mirrors and pillar on the assault screen.

The changes mean she would have to lean back to use the mirror, so her feet would be off the pedals.

The assault bar, one of the new additions, which "designed" Tracey out of her job

However, trade union Unite say Tracey has been “designed” out of her job.

Speaking to the Guardian, Tracey said she has been struggling emotionally since.

She told how she has been forced to “put everything on hold financially” and is now unable to plan for her future.

Over the festive period, she did not buy any Christmas presents and today sees the deadline to lodge her final appeal amid a cost of living crisis.

During her decades of work, she faced countless comments and sexual remarks and dealt with it all in a male dominated industry – with 84% of bus drivers being male in 2021.

Tracey was initially suspended due to her height but then later dismissed with 12 weeks notice. She has since worked with her union, Unite, to try and resolve the situation.

Go North West offered her a new contract, but with less hours, and therefore less pay, than her previous work.

The widowed mum-of-three has said she has a mortgage and cannot afford to take a pay cut.

Celebrities have come out in support of her including actors Maxine Peake, Julie Hesmondhalgh and James Quinn.

And now a petition demanding her restatement has over 26,000 signatures.

Tracy is smaller than the average height for women in the UK (161.6cm) but the less than 10cm difference has jeopardised her job.

A petition demanding her reinstatement has reached over 26,000 signatures
(

“Her appointment broke the mould for women in the bus industry. She has given 34 years of unblemished service.

“It seems inconceivable, that due to the blind intransigence of its local management in Manchester, Go Ahead is now ready to watch unlimited damage to its international reputation as a result of the tawdry treatment of Tracey.

Discussions between her, her union and her company are ongoing

“But that is exactly what is happening. From Poland to Turkey, from Norway to Indonesia, media reports have pilloried the bull-headed stance of local Go Ahead management."

A Go North West spokesperson said Scholes was a valued member of their team and that they had made a number of proposals to ensure Tracey could still work, but that these were rejected.

They said: “The design of the mirrors on our buses was agreed after consultation with Unite some time ago. All our other drivers of similar height to Tracey are able to view them safely.

"Dedicated, experienced, hardworking bus drivers are difficult to find and so we would never act lightly in a situation like this. We are sorry that we were left with no choice but to bring this driver’s employment to an end.”

The company also said it is working to improve female representation at all levels, with a particular focus on attracting female bus drivers.

Previous : Line of Duty actor says some people ‘think we’re all the same but we’re not’
Next : Lebanon’s currency plummets again amid financial crisis and political deadlock