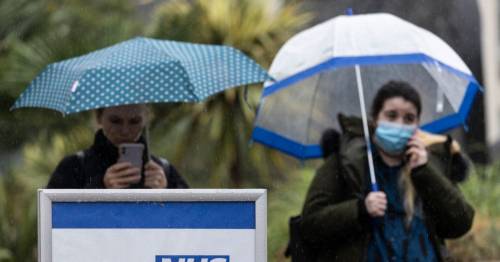 Third wave of Covid-19 in the UK: What the latest numbers from the pandemic are

Covid deaths and cases continue to rise slowly but could rise sharply as Brits start to mix and schools go back this autumn, the latest figures suggest.

Despite a slow and steady increase, cases and fatalities from coronavirus remain far below levels seen during the second wave, according to the Government figures, In Your Area reports.

It comes as the Government announces a plan to battle the virus through the autumn and winter months – when respiratory illnesses traditionally thrive.

The risky season also features a return to classrooms and lecture halls for schools, universities, and colleges – creating potential hotspots for Covid to spread.

As part of the Government's plan is 30million booster doses to see the public through the colder months.

The average number of daily recorded cases of Covid-19 in the UK stood at 35,746 on September 9 (data for more recent days is incomplete).

Cases have averaged between 30,000 and 40,000 for the past few weeks, but there is currently no clear trend upwards or downwards.

Cases were rising sharply at this stage in wave two, however.

This was due to to the spread of the Alpha variant of the virus, first detected in Kent, plus the easing of coronavirus restrictions in the weeks before Christmas.

The second wave peaked at an average of just over 61,000 cases on day 126 (January 4), then fell sharply as the UK went back into full lockdown.

The number of patients in hospital in the UK with Covid-19 stood at 8,256 on September 10, the most recent date for which figures are available.

Patient numbers are still well below levels seen in the second wave, however.

The increase was driven by the spread of the Alpha variant of coronavirus, together with a pre-Christmas relaxation in coronavirus restrictions across the UK.

There is potential for Covid cases to rise again as schools, universities and colleges go back to the classroom
(

Vaccinations were also still at a very early stage, with the first doses being administered on December 8.

The situation today is very different. Nearly 66% of the UK population is now fully vaccinated against Covid-19, with vaccines estimated to have averted at least 143,600 hospital admissions among people aged 65 and over in England alone.

At the same time, little or no restrictions concerning socialising and hygiene are currently in place, events involving large crowds – such as music festivals and sporting fixtures – are happening for the first time since the pandemic began, and schools have returned for a new term.

There is certainly the potential for hospital numbers to carry on rising, but how far and how fast is unclear.

The average number of deaths each day of people who have died within 28 days of testing positive for Covid-19 stood at 129 on September 8 (data for more recent days is incomplete).

At the equivalent point in wave two of the virus (day 115, or December 24), average daily deaths stood at 542, more than four times as high.

Deaths during the third wave so far have remained consistently well below those seen during the second wave, when they peaked at an average of 1,286 a day.

This again reflects the success of the vaccination programme, with figures for England suggesting the vaccines have so far directly averted around 112,300 deaths.

There has been an increase in the average number of deaths since the third wave began.