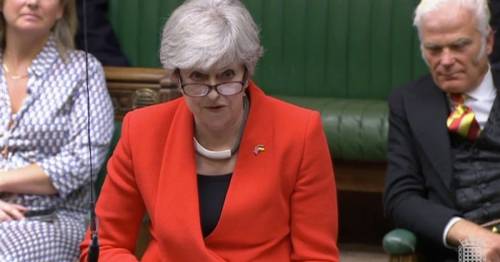 Theresa May today blasted Boris Johnson for shelving vital laws on mental health and waiters’ tips – after five and six years of delays.

Last year the government announced it would bring forward a ban on restaurants creaming off waiters’ tips that was first promised in 2016.

But the Employment Bill, which would include it, is not in the Queen’s Speech meaning it is shelved for a year at least.

Mrs May said she was “disappointed” with the delay, telling MPs: "I'm also disappointed we don't have an employment bill particularly to put through the policy of ensuring that tips that are left for waiters actually get paid to those individuals."

Her worst criticism, however, was for plans for a Mental Health Act Reform Bill to give patients the “dignity and respect they deserve”.

It would modernise the Act to give the sickest more personalised care and stop them being detained unnecessarily.

Yet the Bill is one of five only promised in ‘draft’ form – meaning it’s very unlikely to become law in the next year.

Instead it may only become law by Spring 2024 – or even later if there are delays or a general election.

“I have to say that I think those suffering from mental health deserve better from the Government and I would encourage action on introducing a new mental health act."

Boris Johnson listening to his predecessor

She also cautioned Boris Johnson over reports he could override the Northern Ireland Protocol, a part of his Brexit deal.

The Protocol is the part of Boris Johnson’s Brexit deal that slaps EU checks on some goods arriving in Belfast. The Unionist DUP say it must be torn up before they’ll help set up a new power-sharing government in Stormont.

The Queen’s Speech stopped short of announcing a Bill to override the Northern Ireland Protocol.

But in notes to the Speech, the government warned it would “take the steps necessary” to protect peace in the region.

And No10 warned the situation is “now very serious” after a call between the PM and Irish premier Micheal Martin.

Mrs May said: "I note that there is no reference to what has been referred to in the papers as a bill in relation to, and I'm going to use the word, the Northern Ireland Protocol and possibly to varying the terms of the treaty unilaterally.

"Can I say to (Mr Johnson) and he will not be surprised if I say this, that I do not feel that that would be the right move for the Government. That I think the Government needs to consider not just some immediate issues, but also the wider sense of what such a move would say about the UK and its willingness to abide by treaties which it has signed."

Intervening DUP leader Sir Jeffrey Donaldson said: "Surely what is more important here is the Good Friday Belfast Agreement and the need to protect the political institutions. I stood in the election last week, not a single Unionist member was returned to the assembly that supports the Protocol.

"There is no consensus for this, it needs to be dealt with. It is harming our economy, it is driving up the cost of living, it is undermining political stability in Northern Ireland, it threatens the Good Friday Agreement it has to be dealt with.”

Previous : Memphis Grizzlies’ Ja Morant has bone bruise, doubtful for remainder of playoffs
Next : Chaos as Boris Johnson hints at emergency cost of living help ‘in the days to come’