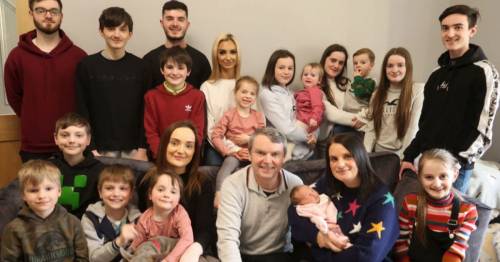 The Radford family nearly forgot one of their 22 children in a Home Alone-style 'mad rush' to Alton Towers.

They were heading to Stoke-on-Trent for a mini-break to the popular theme park to celebrate son Luke's 21st birthday, report LancashireLive.

In a video posted on YouTube, the Radfords told viewers that many of the clan were heading down from Morecambe to celebrate together – and they had a great day planned.

But mum Sue, 46, alarmed viewers when she nearly left one of the massive brood behind – with Josh, 12, not yet back from school on Wednesday.

The family made it – but not before nearly forgetting one of the children!
(

She told viewers: "What a mad rush, the kids are all changed, ready and in the car. We were just about to set off and then realised Josh hadn't got back from school."

Sue said she turned to the family and asked: "Where's Josh? Is he getting ready?"

But the youngster was yet to return – and they noticed as they were heading out the door.

Thankfully, the family avoided a terrible moment and waited for Josh to get in.

Poor Sue thought she had it all planned out perfectly
(

They all jumped straight in the mini bus to get to their 7pm slot for the scare mazes – and to pick up their daughter, Katie, 17, from work.

Due to the nature of what's on offer at Alton Towers, Sue said the family would split so that the older children Luke, Lily, Katy, Amy and Josh could enjoy the mazes with dad Noel, and Sue would stay at the hotel with all of the other kids.

The video continued to show the family arrive at the resort and share their reactions to the three scare mazes at the park.

Noel said: "We'll be frightened out of our skin if any luck."

Back at the Cbeebies Hotel, mum Sue joked that they felt it would have been 'unfair' if they booked 21-year-old Luke into the Cbeebies hotel, saying: "I don't think he'd appreciate one of these rooms would he?"

Noel replied: "I think we should have done it just for a laugh really. He could have been with Iggle Piggle and her friends."

Every day, Sue, mum to Britain's biggest family, spends hours tidying their house, a 10-bed former care home in Morecambe, Lancashire, which has been newly renovated.