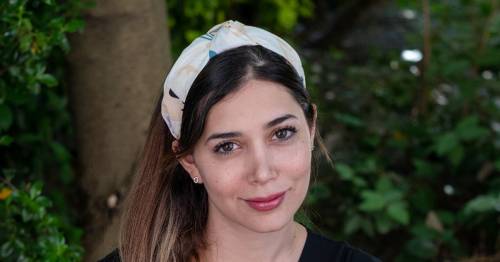 Every object tells a story. For Loujean it’s her Syrian grandfather’s watch, while for Bernd it’s the hairbrush he carried in his trunk on the Kindertransport from Hamburg.

For Rebecca, it’s the stethoscope that she is still a doctor, even though she had to flee from Ukraine.

For Comfort, it’s her father’s Bible, written in Yoruba which she carried when she was trafficked from Nigeria. For Nima it’s the hat he bought in a market in Iran before he left.

For Abdul, a pencil, given to him by the United Nations at the start of his journey as a teenage refugee in Istanbul, fleeing from Syria.

To celebrate Refugee Week, our #PeopleMove project asked dozens of people who came to the UK seeking sanctuary to tell us about a special object they brought with them that connects them to home.

It is the first time Refugee Week ambassador, Abdul Rahman Bdiwi, has shared this story in such detail
(

The people and their objects have been photographed by the Mirror’s award-winning photographer Philip Coburn, who has worked in conflict zones all over the world ­– and was left with life-changing injuries following a bomb blast in Afghanistan in 2010.

As Abdul, a Refugee Week ambassador, explains: “I have never shared my story in this detail and never thought of doing so, but I now believe it is my duty to help people understand why we are here.”

We will be posting stories every day for a few weeks on Instagram. Follow us to read all the stories.

And these are the human beings behind the word ‘migrant’.

"When days are tough, I just hold the watch and smell it. It inspires me.

It is an Omega watch that belonged to my grandfather. I don’t know when he bought it, but when he died six years ago, I asked my family to send it to me from Syria. I couldn’t see him before he died.

We lived with him and when I was younger, he spent hours helping me revise so I could be the best in my class and work towards the best degree.

He always told me, ‘you should keep going, to reach late is better than never reaching’. He inspired me because he completed his law degree while he had four kids.

I lost so many years because of the war in Syria and moving from place to place. It took two years to settle in the UK.

When I went to university here, I struggled but I remembered his advice – ‘don’t give up’. I now work for a big PR agency, but it was challenging because I needed to learn about the art and entertainment culture here.

Before coming to the UK, we moved to Egypt for a while and then went back to Syria, but the war was still bad, my life was just frozen.

Loujean fled the war in Syria to study in London
(

I moved to the UK, while my family went to another country. It was so hard leaving them behind. Coming here there was a culture shock and a language barrier, I felt like I was in a different world, like Alice in Wonderland.

What surprised me the most was how people were so independent. In Syria, we live with our families until we get married, so this was a big challenge, because I was not ready for that. But I made it. I lived alone, I challenged all the barriers.

Life is tough in Syria, but I miss my community and the family gatherings. I am happy because I consider myself a fighter. I fought to get what I wanted, I didn’t give up."

“I brought my Littman stethoscope with me. Because I am a doctor, and Putin and the other Russian criminals are not going to take it from me.

When I left Ukraine I thought, ‘should I pack it or not?’ since I know it’s going to be hard process to get a license to practice dermatology in the UK.

I’m volunteering and helping other refugees as a translator – I speak Ukrainian, Russian, Polish – and I am planning to go through the process of getting my medical diploma recognised in the UK.

Rebecca Matsyievska with her stethoscope
(

I left my apartment in Odesa on the second day of the war and drove across Ukraine to Poland, almost without sleeping or even drinking water. Then I came to London.

I had a nice life, now that’s gone. I have to try and start again.

A friend had said to me – while I was driving by the city which being bombed at that moment – that as soon as you hear a noise, you go and lay in the forest, open your mouth and cover your ears if there is a blast. That is how it is now.

My host family here in London are very nice but now I am here, now I’ve stopped, I feel overwhelmed by emotion, by what has happened.

Look at what has happened. Ukraine isn’t a third-world country. Now you can’t find a safe place in Ukraine.

Everything is being destroyed.

My apartment hasn’t been bombed yet. I have a security app that shows me movement in the apartment and for weeks I was checking it, waiting to see Russian soldiers, now I’ve stopped looking so much."

"The moment the man from the United Nations gave me the pencil in Istanbul, I promised myself I would go to university.

"I had escaped from Syria, and we were at a workshop to learn about the UK before coming here as a refugee.

"I have since completed so many courses the pencil has become small like an IKEA pencil. I bit the end. It was in a horrible condition but I saved it so I could write my first note at university with it.

"Unfortunately, it got lost in a clear-out, so now I don’t have the exact pencil.

"We were forced to leave Syria in 2014. My father and I were walking to the mosque when I saw I had internet. I phoned my sisters to check on them.

"My dad carried on walking just as the mosque was bombed. I found him in hospital. Everything was a blur. He was on a stretcher, screaming he couldn’t feel his legs.

"They took him to theatre. After two hours, a doctor gave me a black bag and said, ‘this is your father’s foot, please bury it’. Two hours later, he handed me another bag, with the rest of his leg, including his knee.

"They wanted me to bury it, because they couldn’t cope with all the dead bodies. I couldn’t bring myself to do it, so I gave it to a friend.

"I slept on the floor next to my father’s bed for 20 days, surrounded by blood and dead bodies. I was 17.

"Bombs were going off and I kept moving my father’s bed to different rooms. After I took him home, the hospital was bombed and the doctors and nurses who cared for him were killed.

"An ambulance took him to Turkey and we lived here for three years. We had never wanted to leave Syria, even when bombs were going off around the house.

"The war started when I was 14. My memories are full of war, violence, people killing, children carrying weapons. I miss my sisters, my friends, my home. It is hard when people say ‘you’re just here for the benefits’.

"We arrived in December 2017. It was snowing, everything was strange. I now work as a community volunteer and hope to go to university."

"I kept these things: a hairbrush, this bag. These objects are not just objects, they are a connection to my family that no longer exists. While they are no longer used, they still connect me to them, to my home.

I have a strange feeling about them.

I came on a liner from Hamburg to Southampton, I had a suitcase and a trunk with my things in. My mother sewed my initials onto these things.

The decision was made to send me and my sister from Bavaria on the Kindertransport after my dad was released from Dachau.

I was the youngest boy. I didn’t know anyone. The decision was made and a promise – my parents said, ‘it will be okay, and we’ll join you as soon as we can’. I think they had the feeling, ‘let the children be safe, never mind about us.’

Bernd Koschland with his hair brush from Hamburg
(

I wouldn’t see them again. I couldn’t speak any English apart from one phrase my mother had taught me, ‘I’m hungry, please may I have a piece of bread?’

I arrived in Southampton and was sent to a hostel in Margate before being settled with a foster family.

I was a stranger in a strange land. I decided, ‘I have to make my home somewhere’. I didn’t have a background, I had to make a new one. I was happy to be a Britisher.

I became a teacher in London. I didn’t go back to Germany for a long time.

Now we have to help people like those coming from Ukraine. As a country we have to pull together."

"This Bible belonged to my father, it is the only thing I have left of him and of the place that was my home.

It makes me feel like whatever happens, I’m not alone. In my darkest days I’ve been able to reach out and touch it and feel that my dad is with me.

It is so precious. My dad was a pastor when he was alive. I was struggling with life in Lagos, Nigeria when a colleague offered me the chance to come to the UK but when I got here I realised things weren’t how they said they would be.

I was a victim of trafficking. I thought I was coming to the UK for a better life, but things didn’t work out like I thought they would.

Odunayo ‘Comfort’ Adeyemi, with her bible from Nigeria
(

When I managed to get help, things were still difficult. I was sofa surfing for a while and I was the victim of a racially-motivated attack.

The Bible came from the UK in the beginning. It first belonged to Pa S.G Elton, who was a British missionary in Nigeria and my father trained under him as a missionary too and received the Bible from him.

Of course, it was a relief but I’m not there yet, I have good and bad days. I struggle with day-to-day life sometimes but I’m doing my best to keep going.I just want to make a better future – a peaceful one."