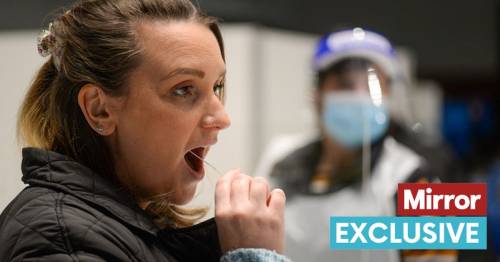 Test and Trace set for axe with 10,000 job cuts because there’s “no money left”

The £37billion Test and Trace scheme is already being dismantled – despite fears of a devastating winter Covid crisis.

A leaked dossier has laid bare plans to axe the shambolic system in 2022. But a major step in winding it down will come next week.

The Sunday Mirror understands the contact tracing system run by Sitel and Serco will be wound up early over crippling costs.

Up to 10,000 contact tracers and call handlers were last week told their jobs were being axed, insiders said.

In briefings by managers, teams were told there was “no money left”.

Changes to the way tracing is done and more use of technology means jobs will be lost.

And although Serco refused to comment, sources say they will not renew their contract when it expires on November 30.

The Government’s plan is contained in a 160-page Whitehall dossier codenamed Operation Rampdown.

The document details how Test and Trace will be ditched and the requirement for those exposed to Covid to self-isolate for 10 days will end.

It comes despite the UK recording more than 40,000 new Covid cases on consecutive days last week.

With a deadly fourth Covid wave sweeping Europe, experts fear the Government has made the wrong choice.

Independent Sage’s Professor Susan Michie, a behavioural scientist, warned: “If we want to avoid the kind of lockdowns we are seeing in mainland Europe we need to step up our efforts in managing the pandemic and not start shutting them down.

“The World Health Organisation says a working test, trace and isolate system is a cornerstone of pandemic management. Unfortunately the model which the Government pursued has been eye-wateringly expensive and not as effective as it should have been.

“The model is broken, the model was never the correct one… and it has been evident all along.

“Transmission rates are still high – there are more than 30,000 new cases a day and 1,000 deaths a week. It is not a situation a country like ours should be accepting or happy to live with.”

Currently, those who self-isolate are supposed to be contacted by Test and Trace workers to check they are complying with the rules.

Unvaccinated travellers who arrive in the UK may also no longer be contacted.

A White hall insider said: “The trough has run dry and the Treasury isn’t prepared to keep feeding the beast. The problem is, however, that cases are still rife and winter is yet to begin.

“For all its faults, it’s a dangerous game to sack contact tracers when the pandemic is still raging. You only have to look to Europe to see how things change. This is going to cause problems tracking variants or even keeping an eye on local outbreaks.”

This year the programme – heralded as “world-beating” by PM Boris Johnson – received another £15billion. The total is equivalent to a fifth of the entire annual NHS budget.

The Tories were slated for outsourcing Test and Trace, with 2,000 consultants paid a typical £1,100 per day.

All NHS Test and Trace Covid testing sites in England began closing at 6pm from this month in a bid to start saving cash. But Covid cases have doubled four times since June. And the Independent Sage panel warned that “a further doubling would put tremendous pressure on our health service”.

The system has also come under fire from education bosses.

Last week it emerged that the Government had been unable to say how many contacts of Covid cases have been traced in schools since the start of the new academic year.

This comes as latest figures show that Covid cases are rising once again among pupils, amid warnings from heads about the importance of contact tracing.

The Department of Health and Social Care said it did not have data on the number of people who had been identified and contacted as Covid contacts in a school.

“If you are told to isolate by NHS Test & Trace it is essential that you do, unless exempt. We are constantly looking to make the tracing service as responsive, efficient and effective as possible.”