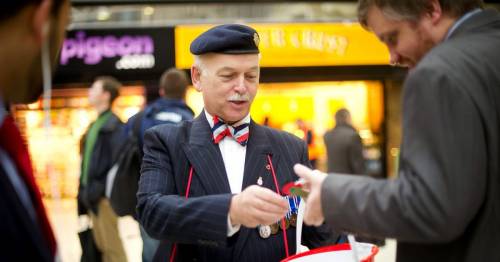 Tesco will not be selling Royal British Legion (RBL) poppies in some of its stores this year because of a lack of volunteers.

The RBL runs the Poppy Appeal, and the paper poppies it sells every year raise money to support current and former members of the armed forces and their families.

The people selling these poppies are volunteers, and some Tesco shoppers have been told they can't get a poppy in-store due to a lack of them.

The issue affects Tesco stores in Leicester and Wolverhampton, according to Grocery Gazette .

More than 40,000 people have given time over the last fortnight to help sell poppies.

Among this number are several MPs, some of whom volunteered to sell poppies in Tesco stores.

These include Labour MPs Nick Smith and Stephanie Peacock.

It was great to join the British Legion to sell poppies at Tesco in Hoyland. They have received brilliant support locally as they collect for their Remembrance Poppy Appeal.

As Shadow Veterans Minister I know the incredible work that they do across supporting our veterans. pic.twitter.com/FDU1NboA9R

A spokesperson for the RBL said: "We are grateful to every commercial business that permits Poppy Appeal collectors in store or accepts Poppy Appeal boxes on counters, including Tesco.

"We have 40,000 dedicated collectors out this year and our volunteers work closely with many retail outlets in their local communities, however it is not possible to have poppies in every location.

"For anyone who hasn’t been able to find a poppy locally, we do have poppies available to order through our online Poppy Shop, and we always welcome new volunteers to help us ensure every poppy counts."

This weekend marks Remembrance Sunday, which takes place on the Sunday closest to Armistice day – November 11.

Many remembrance ceremonies last year were cancelled or limited capacity due to the Covid-19 pandemic.

In 2020 people were encouraged to donate to the RBL using QR codes, contactless methods and via online platforms.

What does the poppy symbolise?

Poppies are inspired by the 1915 poem In Flanders Fields by Canadian officer John McCrae.

They were later adopted as a significant symbol of the Royal British Legion.

These poppies are now worn not only during Remembrance but also at the funerals of veteran, as well as events like memorial services or anniversaries.

There is no convention or agreed way to wear a poppy, but many choose to wear them on their left lapel.

This shows that the cause is close to the wearer's heart – and the Queen chooses to wear a poppy like this.

Typically the Poppy Appeal lasts from the end of October – starting on Thursday, October 28 this year- till Remembrance Day on November 11.

The poppies can be worn throughout this period but also on the evening after the Remembrance Day ceremony.

While some people choose to remove their poppy at the end of the day on November 11, others remove it after the ceremony and place it on a memorial as a mark of respect.