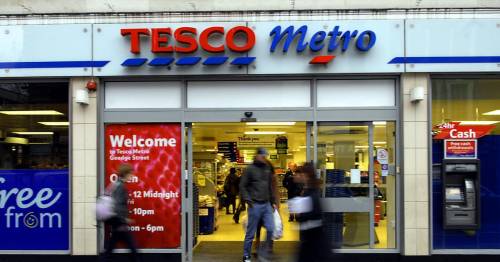 Tesco shoppers face paying more for a basket of essential goods at eighty-nine stores under the retail giant’s decision to axe the Metro brand.

A comparison of a basket of essential goods – inducing bread, cheese and tomatoes – found households could find themselves spending 23% more at an Express store than a local Tesco superstore.

Warwick and Leamington MP Matt Western, who conducted the investigation with The Mirror said shoppers in his constituent face paying higher prices simply because of a name change.

Western accused the grocer's bosses of ‘price gouging’ as they bask in post-pandemic profits.

Earlier this year, Tesco scrapped the Metro status of 147 of its stores across the UK, redesignating 89 as ‘Express’ models and 58 as superstores.

In one UK town, Leamington, it converted the local Metro store into an Express in July, prompting anger from shoppers after sharp price increases.

Are you a Tesco employee affected by these changes? Get in touch: emma.munbodh@mirror.co.uk

Locals are calling for a U-turn on the rebrand
(

A price comparison by Mr Western on October 5 found shoppers face paying 23% more for an identical shopping basket in the recently converted Express than he did at a superstore in nearby Warwick.

Lurpack butter, for instance cost £2.05 at the Express brand versus £1.80 in the local superstore.

Mr Western said based on his shopping receipts: “Most prices have been hiked by about 10 to 20%.

“But some everyday products have increased even more than this – including the bottle of red wine I bought which cost 60% more in the new Express than in the superstore.

“There is no affordable town centre alternative for Leamington shoppers, and it looks as though the company is cashing in on a captive audience to the detriment of the elderly, the disadvantaged, those with limited mobility, the town’s air quality and hard-pressed students.

“The price of energy, fuel, and train fares are on the up, inflation is soon to rise to above 4%, National Insurance has been increased and the £20-a-week Universal Credit uplift has been cut.

Mr Western has urged Tesco bosses to reverse the decision amid a worsening cost-of-living crisis and has written to chief executive Ken Murphy.

“It is no exaggeration to say price gouging like this could not have come at a worse time.”

The rebrand has also resulted in opposition and campaigns across the UK in places like the London boroughs of Tower Hamlets and Richmond – with some customers in Nottingham arranging a boycott.

In Mr Western’s constituency, 1,300 people have signed a petition against the firm’s decision.

“The decision is clearly motivated by corporate greed.

“Tesco must re-designate the vital supermarket as a superstore.”

Mr Western is calling on the rebrand to be reversed

Mr Western is calling on the rebrand to be reversed

Campaigners say the rebranding of the Leamington store makes little sense due its size and central location in a busy town centre.

They compare it with a nearby 8,400 sq store in Knowle, Solihull, redesignated as a superstore from a Metro, despite being only a third of the size of the Leamington town centre supermarket – which is 24,000 sq ft.

The town centre store also has 22 check outs compared to most Express stores that often have fewer than five.

Tesco said its prices are balanced out by its Clubcard promotion
(

The grocer called time on the Metro brand after three decades
(

In the six months to August, Tesco saw its operating profits rise by 29% to £1.3billion.

On top of the price hikes at rebranded Express stores, Tesco Chairman John Allen recently warned prices in all its stores will rise due to the lorry driver shortage and fuel cost increases.

Speaking to Robert Peston o ITV, Mr Allan said: "I think it’s almost impossible to forecast, but I mean I think we’re probably looking at, for food overall, you know, mid-single digit increases which is much higher than we’ve had in recent years.”

Have you noticed higher prices at your recently converted Tesco store? Get in touch: mirror.money.saving@mirror.co.uk
(

A Tesco spokesperson told The Mirror: “Over the last few years, we have seen our customers’ shopping habits change and we have taken the decision to re-brand all of our Metro stores to better reflect this.

“Our Metro format was originally designed for larger, weekly shops, but today nearly 70% of customers use them as convenience stores, buying food for that day so the majority of them will be rebranded as Express stores.”

The chain said it has recently introduced Clubcard Prices across all 1,800 Express stores to offer customers savings when they sign up to its loyalty club.

What are your thoughts? Let us know in the comments below

Previous : Bobbi-Anne McLeod’s mum says she ‘will never be forgotten’ at emotional vigil
Next : Millions of state pensioners to lose £169 next year over inflation and triple lock cut