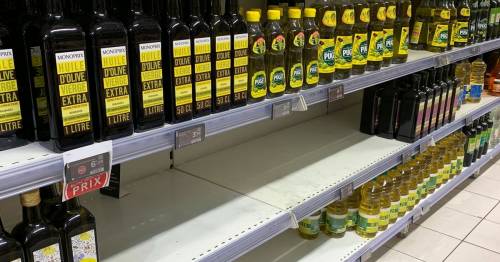 Tesco is joining Waitrose and Morrisons in rationing its cooking oil due to Russia ’s ongoing invasion of Ukraine.

The war in eastern Europe has choked off supplies of sunflower oil to the UK's food industry, forcing up the price of popular food items further.

The majority of the UK’s sunflower oil comes from Ukraine, but the war has devastated its availability as exports ground to a halt when the Russian troops swept in.

Firms were left desperately trying to source other vegetable oils, with the price of oils in shops reportedly around 20 per cent higher than they were a year ago.

In direct response, Tesco has joined other supermarket giants in introducing limits to what customers can buy.

Shoppers can only three bottles per person across its entire cooking oil range.

The UK’s biggest retailer has said it has good availability of cooking oil, but on its website a small number of vegetable oils are out of stock.

The move follows in the footsteps of Waitrose and Morrisons who have already limited cooking oils to two per person.

Waitrose said it was “closely monitoring the situation and working with our suppliers to ensure customers continue to have a choice of cooking oils”.

As well as being a cupboard staple, sunflower oil is also found in hundreds of products from biscuits, crisps, mayonnaise and ready meals.

Tom Lock, founder of The British Snack Company, which makes hand-cooked crisps for sale in pubs, told the Guardian that after potatoes, its other vital ingredient was sunflower oil.

He told the paper it was the “industry standard” for snacks and explained that the company had been forced to switch to rapeseed oil.

He said at the moment it was “impossible to get sunflower oil in any quantity” and added that prices would inevitably rise as a result.