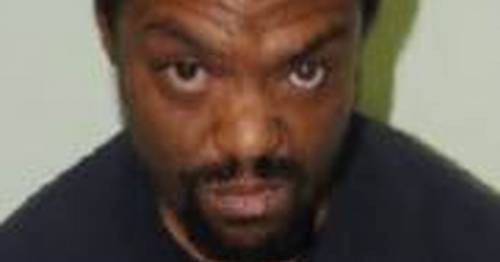 The first photo of a grinning knifeman who stabbed five strangers at random during a terrifying attack in a shopping centre has been released.

Raphael Chevelleau bought a £1.50 knife from a pound shop near his home before hiding it in his coat and getting on a bus to the Manchester Arndale Centre in October, 2019.

The defendant was appearing via video link from prison dressed in a black jacket as the trial took place at Manchester Crown Court.

He is expected to be sentenced on Monday.

Were you affected by this incident? Let us know at webnews@mirror.co.uk

Raphael Chevelleau stabbed five strangers during an attack in 2019
(

One victim, a woman who was out shopping with her husband, said Chevelleau was "smiling a wide cheesy smile" as he lunged at her.

She recalled shop shutters "coming down swiftly and there was a panic".

Prosecutor, Andrew Ford QC, told the court the attacker "broke into a run" as he randomly lashed out with the knife.

His first victim was a man in his 50s, before he attacked four women aged 19 to 49, including a shop employee who admitted they thought they would die after being stabbed in the back.

Chevelleau, who lived alone in the city's Blackley suburb, chillingly told police following the incident: "I was going to stab my ex-girlfriend but I couldn't be bothered to travel so I took it out on someone in town. I am guilty as sin."

When being detained, he told officers "arrest me you white trash", say prosecutors.

CCTV and bodycam clips of the moments before, during and after the attack, have been released by Greater Manchester Police.

The footage shows him purchasing the knife, before entering a bus and then his movements inside the shopping centre.

He is seen disposing of the knife in a bin after the attack before being arrested outside.

He is told to put his hands up and then to turn over on to his chest while handcuffs are placed on him.

His movements that day were shown in court
(

Appearing for the defence and told the court he was diagnosed with paranoid schizophrenia.

"He is one of the most ill patients I have ever come across in my capacity," he said.

The court heard Chevelleau has a "schizophrenic illness which has been resistant to treatment".

He had 56 prior offences on his record, dating back to 1998, with cannabis said to have been a problem for him for some time.

Prosecutor, Andrew Ford QC said the defendant bought the knife at around 10.40am and was described as "calm" by the shopkeeper but on exiting he ran.

He arrived in the city centre at around 11am and made his way into a baby change area in the shopping centre where he left packaging for the weapon.

Mr Ford said Chevelleau "caused widespread fear and panic" during the incident and there was a "sense of pandemonium as people fled".

His first victim, aged 59 at the time, had gone to the centre to have coffee with a friend and was heading for a train home.

The man was stabbed three times in total, including in the back but was released from hospital the same day.

He was arrested after a terrifying knife attack in the Arndale
(

A witness described seeing the victim lying on the ground "suffering with quite heavy blood loss".

The second victim was a 33-year-old woman out shopping with her partner.

As she went to step into Office she "looked up and saw a man running at her", with another man giving chase shouting "stop him, he has a knife", said the prosecutor.

"The defendant passed her right side then lunged at her. He swung the knife towards her stomach."

She "felt a dull pain going in and out", adding: "The man was smiling a wide cheesy smile as he did it."

She was treated inside a shop where she saw another bloodied male.

The fourth victim was a 19-year-old girl who was visiting Manchester from Ireland with a group of friends for an 18th birthday.

Mr Ford said: "She suffered more serious injuries than the other victims."

The victim was with her pals near a Starbucks when people began shouting "everyone run" and saw the defendant being chased by men in red.

She said: "A man was looking right at me as if he really wanted to hurt me."

Mr Ford continued: "Before she knew it she had been attacked. She tried to pull away from the man and heard her friends screaming."

She was given a make-shift bandage from a scarf with the wound having gone to the bone.

She had to undergo an operation under general anaesthetic and remained in hospital for four days.

The fifth victim was a 49-year-old woman and had been working at a department store at the centre that afternoon.

She heard screaming and saw "people were running for their lives" and so followed the crowds up some stairs.

She described "feeling a banging on her hand three or four times and then an impact in her back".

The police quickly got their man
(

Due to her layers of clothing she was not seriously injured.

In court, his barrister Arthur Gibson said: "It is a trite observation to say that he wishes to apologise to the victims because that suggests he has rationalised what he did," he says.

"But I do ask the court to accept and those injured to accept that he does wish this had never happened.

"And that he did not have that illness and that what happened did not."