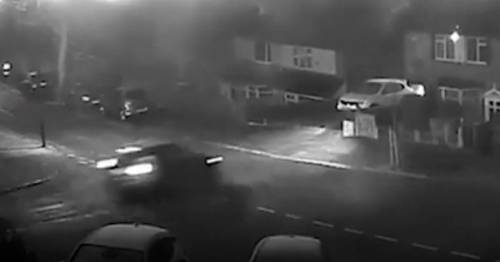 CCTV footage shows the dramatic moment an out of control car speeds down a hill and smashed into a parked car, shunting it through the front of a house.

The terrifying footage shows the crash in Northfield, Birmingham, in the early hours of Saturday morning.

As most residents slept soundly, a car sped down the hill, which is known to be icy, toward the junction.

Instead of slowing and turning, the car shoots across the road and into the parked car opposite.

It hits the vehicle with such force that it shunts the car through the front of the house, smashing the wall and window inwards.

Then, the driver can be seen leaping from the wreckage, and running away.

Emergency services were called to the road at 3am today, to be greeted by the horrific crash scene.

Thankfully no one was hurt, but neighbours were awoken by the sound of the impact and the car alarm that followed.

A number of residents went to investigate and were shocked to find the car empty, with the airbags activated and the keys still in the ignition.

Emergency services were called to Cheverton Road at 3am this morning

They tried to alert the people inside the home, thankfully, all of whom were uninjured.

When emergency services arrived, the road was blocked off and police attempted to locate the driver.

The damage to the house is not believed to be structural and West Midlands police are continuing their inquiries to locate the driver.

They have urged anyone with information to come forward.

Moments after the crash the driver can be seen running away

A West Midlands Police spokesperson said: "We were called to Cheverton Road, Birmingham at 3am this morning to reports a car had collided with another car that had crashed into the side of a house.

"The occupants of the house were not hurt and there is not believed to be any structural damage to the house.

"Enquiries are ongoing to trace the driver of the car who left before emergency services attended the scene."