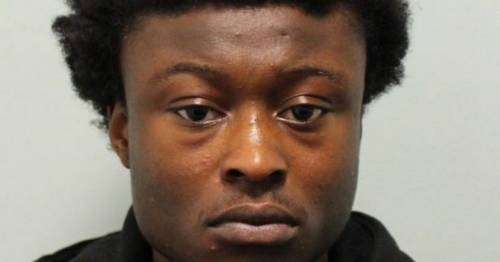 A man who carried two submachine guns on the London Underground has been jailed as chilling footage emerged of the moment he was caught.

Video showing the moment David Longhor, 20, was arrested close to Chiswick Park Tube Station on March 2 earlier this year has been released.

The court heard that Longhor left his home at around 6.15pm and began walking to Southall train station in west London carrying a black rucksack and wearing latex gloves.

He boarded a train to Ealing and then Chiswick Park, where specialist crime and firearms officers sped towards him before he was detained on the floor and searched.

Bodycam footage of one of the weapons
(

Longhor initially denied he was carrying any firearms. But when police searched his rucksack they found a wrapped box.

Within the box were two Skorpion submachine guns and 40 rounds of ammunition.

Officers also seized a tourniquet and field dressings along with a small amount of cannabis.

When the guns were found, Longhor told officers “that is not mine”.

He was arrested and interviewed the next day, where he provided no comment.

The guns were examined by police experts and found to have been converted to capable of rapid fire, while the ammunition was also live.

When entering a plea of guilty at the same court on April 22, Longhor claimed he had been transporting the weapons for someone else and that he was “paying off a debt”.

In mitigation, the court heard that Longhor still has aspirations of becoming a racing driver, which shows his “immaturity and possibly stupidity”.

He added: “You were wearing latex gloves, so it seems to me you were forensically aware and did not want to leave your fingerprints if you could avoid it.

"You had submachine guns which had been converted and bullets from the magazines that you had with them.

“They were capable or wreaking havoc if discharged. They are lethal, lethal weapons and you were in possession of them.

"These are weapons that are atrocious. When it comes to these courts, we have to make this clear and I will. Your young age is a factor, but these are dreadful weapons.”

Longhor, of Villers Road, Ealing, was jailed for nine years and nine months.