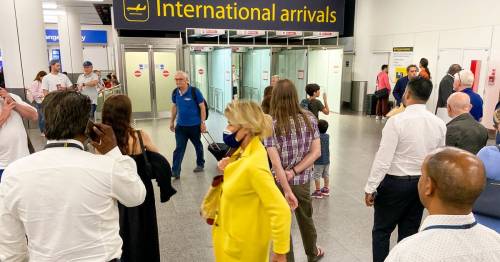 Terrified widow, 92, slams Gatwick Airport after she was ‘locked in a side room’

Gatwick Airport have come under scrutiny after a 92-year-old woman was left "shaken, shocked and in tears" after she was locked in a side room while awaiting special assistance staff.

Jean Curran, who has mobility issues and walks with a stick, claims she climbed out of her wheelchair and crawled up a flight of stairs in a desperate bid for attention.

The widow's family have demanded answers from the airport for, what they describe as, catastrophic failures, reports the Mail Online.

Curran was on a return flight from Madrid on June 14 having travelled with her family for her grandson's wedding. The rest of her family disembarked without issues, but she was left to wait.

She was reportedly taken off the aircraft and into a long narrow room with glass doors at either end which could only be entered using a security pass.

Curran claims a man said someone would be along to collect her shortly, but she became anxious at the lengthy wait when no-one showed up.

"It was absolutely terrifying because I was just locked inside this corridor with nowhere to go," she said.

"I was very worried because I couldn't hear a sound. I could see baggage handlers below, so I started hammering on the window and shouting for help to get their attention but they didn't see me."

Becoming further distressed, she spotted a flight of stairs at one end of the corridor so she climbed out of her wheelchair and began crawling up them for assistance.

Curran's son, Martin, began getting worried about his mother's whereabouts and flagged down a staff member on a special assistance vehicle and pleaded with her to help him locate her.

Her son described seeing her upset as a horrible and very upsetting experience, which should not have happened to a 92-year-old woman.

He claimed the incident could have had catastrophic repercussions on her health should she have had a heart attack or fallen down the flight of stairs she ascended.

A Gatwick Airport spokesperson reportedly said: "This sounds like an awful experience for the passenger concerned and we will continue to look into what might have happened.

"At this stage, we can however say that two passengers had pre-booked assistance on this flight and were both disembarked as arranged by our assisted service provider Wilson James.

"No passenger with the name reported had pre-booked assistance on this or any other flight that day. Nor were Wilson James advised by the crew that any further passengers had requested assistance while on this flight.

"No passenger should have to experience something like this and we will continue to look into this, including contacting the airline concerned, to establish further information."