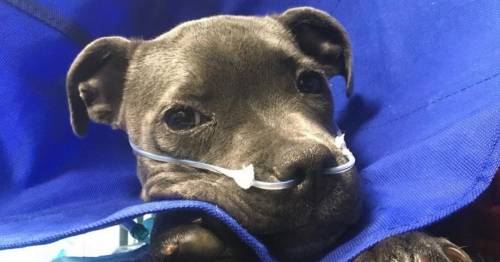 ‘Terrified’ owner’s £12,000 vet bill as dog put on ventilator after swim in sea

A social worker has been landed with a £12,000 vets bill after her dog became sick after swimming in what she says was polluted sea water.

Louisa Moss was 'terrified' when her eight month old Staffordshire bull terrier Nalu picked up a severe infection and became so ill it had to be put on a ventilator .

Her dog was struggling to breathe, with only a quarter of one of her lungs working, and spent six touch-and-go days at a veterinary specialist referral centre fighting for her life.

Nalu survived but her owners believe she was lucky to live after they suspected polluted sea water to be the cause of her illness.

The family live on Hayling Island, Hants, where Nalu would swim in the sea.

Dog owner David Arthur revealed this week that his Great Dane Odin died as a result of swimming in the sea there.

Odin's death came after Southern Water was fined a record £90m last July for deliberately pouring sewage into the sea.

A number of locals and organisations had reported pollution and illness during 2021.
Mrs Moss believes the dirty water has affected her dog and others, as well as local people who go into the sea too.

The 47 year old said: "All of a sudden she just came down really ill so we took her to the vets and they said she had aspirational pneumonia and E. coli in her lungs.

"We believe it came from her swimming in the sea, because we live near Langstone Harbour, we used to walk down there with her and take her into the water to get her used to the water because we have a boat and wanted her to come on it with us.

"At first we thought it was kennel cough, but you only get E. coli from faeces so we thought it might be from swimming in the sea and the sewage.

"We ended up with a bill of about £12,000 because the vets told us she wouldn't make it if she stayed with them because they didn't have the equipment.

"She needed a really high ventilation machine so we took her to the specialist hospital, Lumbry Park in Alton, and she stayed there for six days.

"They said there was a good chance she could die and I wasn't allowed to visit her in case she got too excited.

"Only a quarter of one of her lungs was working, the other lung wasn't working at all.

The vets rang us three times a day saying she's not eating anything and then she would seem a bit brighter.

"We thought that was it but on the sixth day she actually ate something.

"It was so traumatic. I was in tears every single day, it was one of the worst experiences of my life."

Langstone Harbour and its mudflats
(

Mrs Moss said: "I found out about Odin because I was telling a lady who walks her dog past my house about what happened to Nalu and she said 'another dog died from that'.

"I messaged the owner to say if he was taking it any further I would back him up. You don't give out money for something that isn't your problem."

Mrs Moss says she plans to take Southern Water to small claims court as she believes they are at fault for Nalu's illness.

"I emailed Southern Water and said I believed my dog has become ill after being in the water. They don't believe that the sea is dirty and said it has always tested as clean there.

"It's not just dogs, people are getting ill from being in the water and everything. We kayak and we take our paddle boards out there.

"Now I'm just constantly worried she is going to get ill again. I won't let her in the water anymore and everyone I have spoken to has said they won't go in the water now either."

A spokesman for Southern Water said: "We are sorry to hear Ms Moss' dog became ill. We understand how a bereaved pet owner would look for someone to blame but there is no evidence we are either directly or indirectly responsible.

"The beaches around Hayling Island have among the highest quality water in the country – tested throughout the summer by the Environment Agency with results published on the Defra website.

Some 78 of the 83 beaches in our area are 'excellent' or 'good' according to the government's classification and none are below acceptable.

"So that recreational water users can take informed decisions about whether to take to the sea we publish every release of storm water made in near real time 365 days a year."