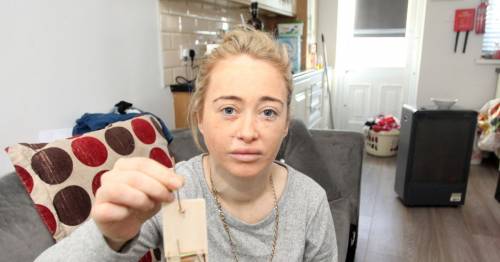 A fed-up mum of four has begged her local council to find her family a new home as their house is 'infested with vermin' she fears could kill her children.

Leanne Mulqueen, 32, says the two-bedroom bungalow she shares with her kids aged eight, four, two and three months, is cramped and stained by waste from the mice and rats.

Leanne, who was homeless for seven years before moving in six months ago, says she fears one of her young brood could become seriously ill or possibly die because of the conditions, the Irish Mirror reported.

She said: “Since I came here, there have been mice and rats.

“After Christmas I asked the council to come and see the situation; there was a bed destroyed in droppings, my daughter’s christening suit was eaten alive, shredded, I was in an awful state and I didn't know what to do.”

“The rats and mice are destroying everything, they’re coming from the attic. I’ve traps everywhere, but there still coming, the place is infested, I’ve complained it numerous times and I'm getting nowhere.

“They’re living in the attic — I’m actually living with mice and rats.

“I’ve dozens of traps, in one room there’s at least six or seven mice traps and it’s dangerous for my kids, I need to be out of here for my kids safety.

“Is the council waiting for one of my kids to die from urine off one of the rats? Is it going to come to a stage where one of my kids is actually going to be in a (coffin) box before I get anywhere?”

She said the council paid for a private pest control firm to tackle the problem in her home in Prospect, Limerick, but said this has not worked.

“I’m only five stone in weight and I’m constantly [stressed] because my children can’t play in their home as I have to watch everything that they are touching out of fear that one of my kids is going to die.”

A spokesman for Limerick City and County Council said it “does not comment on cases relating to an individual person as it doesn’t believe that it is right to discuss an individual’s personal situation in such a public forum.”

He added: “The Council’s Customer Services department is open for tenants or customers to discuss their situations or raise their issues.”