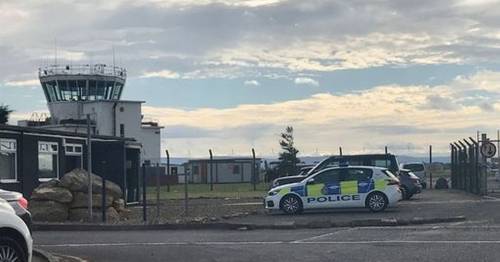 Teesside Airport has been forced to shut temporarily after an 'incident' on a plane lead to three passengers being rushed to hospital.

A pilot and two passengers who were onboard a light aircraft have been taken to hospital.

One of the trio had to be airlifted to hospital from the airport, as the airfield was shut 'indefinitely'.

Emergency services were called to the incident at 9.39am Saturday.

The emergency sparked flight delays this morning, with other services diverted to land in Newcastle.

Rob Cherrie, a commander from the Fire service at the scene, told Teesside Live. he believed the incident took place during takeoff.

The airport's statement said "Our runway will remain closed until further notice while a thorough investigation is carried out."

Have you been affected by this incident? Email webnews@mirror.co.uk

The airport confirmed a pilot and two passengers were onboard the aircraft and all three had been taken to hospital".

A statement on its website reads: "We can confirm an incident occurred today involving a light aircraft at 9.39am.

"A pilot and two passengers were onboard and have been taken to hospital.

"Our runway will remain closed until further notice while a thorough investigation is carried out.

It added: "We would like to thank the emergency services, on site staff for their quick response."

According to the air ambulance service, the helicopter "got to the scene quickly" with a doctor and a paramedic on board.

A spokesperson said: "We had a doctor and paramedic on board, and we got to the scene quickly from our base in Eaglescliffe."

Durham Constabulary said police will release information "in due course".

Previous : Inside eerie abandoned water park that shut down nearly 20 years ago
Next : Spider expert explains what you should always do when you see daddy long legs