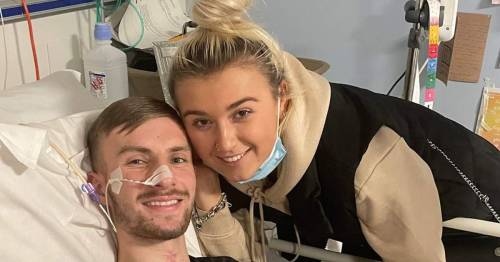 A teenager is relearning how to walk after a routine operation to remove his tonsils left him fighting for his life.

Corey Wilkinson, 19, from Cleethorpes, Lincolnshire, had the surgery on November 23 and was discharged the following day.

But he soon experienced complications and was rushed into A&E at Leeds Teaching Hospitals by his girlfriend Courtney Backhouse, 19, after he began bleeding from the mouth.

Corey returned to surgery where he suffered a cardiac arrest and lung collapse, following the bleed to his tonsils and was put on life support for two weeks.

Now, Corey, who is training to be a personal trainer, is having to relearn how to walk, talk and eat following the severe complications.

On January 6, the brave teen was able to walk on his own for the first time with hospital staff filming the incredible moment that shocked his family.

Corey during his hospital stay
(

The family in hospital
(

His mum Nicki Wilkinson, 39, said: "It was amazing to see the video. I was in shock.

"The last time we spoke, he was just taking a few steps so to see him walk the length of the corridor was the best thing.

"His smile says it all. He's really determined and has pushed through every task he's been given by the doctors and we're all amazed by him."

Corey's tonsils had always been large and he had suffered a burst blood vessel on his tonsil prior to the op.

Doctors then decided to take them out and send them for a biopsy.

He had an overnight stay at the Diana Princess of Wales Hospital in Grimsby, North East Lincolnshire, and visited his girlfriend in Leeds the next day.

But the evening he was released, Corey began bleeding and Courtney noticed he was struggling to breathe and they rushed to A&E.

Nicki said: "I found out he had had a major bleed and they struggled to stop the bleed and had to put him on a ventilator. A lot of blood had gone into his lungs.

"We were told to prepare ourselves for the worst and they weren't sure whether he was going to have long term or short term brain damage."

Corey's parents Nicki and Barry Blastland, 40, rushed straight to the hospital after finding out their son had been taken into intensive care following the operation.

Nursery worker Nicki added: "After two weeks on life support, they took his sedation away slowly and he started following a few of their commands.

"We had no idea how serious the complications could be from having what seemed like a simple procedure that a lot of people have had.

"I want people to know that this can happen and it can cause life-altering changes if there are complications.

"He's now had his feeding tube removed as well and is able to eat blended foods which is amazing as there was concern he might not be able to eat again.

"We're all so proud of him and can't wait for him to come home."