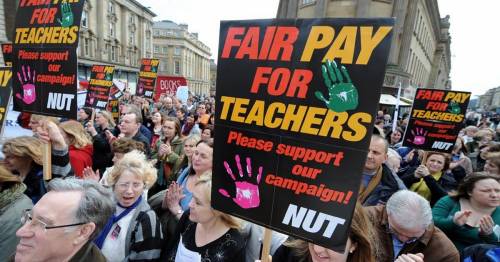 The UK's largest teaching union has warned of strikes in the autumn until the Government commits to "inflation plus" pay hikes.

The National Education Union said it would consult its 450,000-strong membership over potential industrial action if ministers fail to act on pay, staffing and workload issues.

In a letter to the Education Secretary Nadhim Zahawi, NEU chiefs Dr Mary Bousted and Kevin Courtney said: "We can no longer stand by while you run both education and educators into the ground."

The Government has proposed a 3% wage increase for most teachers in England to the pay review body, which has not yet reported back on its decisions.

But the NEU said this would amount to a "huge" pay cut as inflation hit 9.1% on the consumer price index measure today.

It comes amid warnings over a summer of discontent as the Government goes to war with unions over their demands for inflation-busting pay rises.

No10 argues these hikes will fuel a wage-price spiral – but failure to act leaves workers facing real terms pay cuts.

Teachers pay has fallen by a fifth in real terms since 2010, even before this year's increases in inflation, the NEU said.

"Teachers and school leaders often tell us that workload is their predominant concern," the letter said.

"But right now, our members are telling us pay is a big issue too.

"The combination of unsustainable hours, the work intensity during those hours and ever-falling pay levels are damaging our schools and the young people we are educating."

They added: "You must respond to the new economic reality of double-digit inflation and the threat this poses to teacher living standards.

"We call on you to commit to an inflation-plus increase for all teachers. It is not good enough to only propose higher increases for beginner teachers (which are themselves likely to be lower than inflation)."

Current inaction is "causing real damage to education and to our members' livelihoods", the union chiefs warned.

They told Mr Zahawi: "We have to tell you that failing sufficient action by you, in the autumn term, we will consult our members on their willingness to take industrial action.

"And we will be strongly encouraging them to vote yes. We can no longer stand by while you run both education and educators into the ground."

An indicative ballot would start in the autumn term, potentially leading to a formal ballot on strike action.

The NASUWT teaching union has also called for a 12% pay rise and said it could ballot for industrial action.