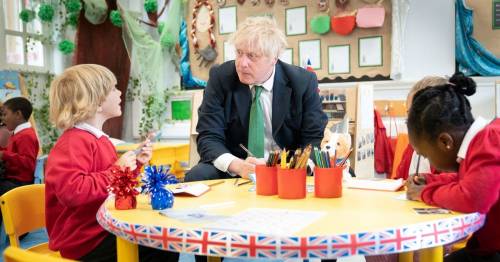 Hundreds of thousands of teachers could be balloted for strikes in October as a "last resort" as Boris Johnson threatens millions of public sector workers with a real pay cut.

The National Education Union tonight warned any pay rise for teachers must be based on inflation as of 7am on Wednesday – which could top 10%.

But with the teachers’ pay review body due to report back imminently, Boris Johnson has already indicated today that he will not do that.

NEU general secretary Dr Mary Bousted warned she was keeping strikes by her 450,000 members on the table as a “last resort”.

She told TalkTV’s The News Desk: “I’m saying to [Education Secretary] Nadhim Zahawi get round the table – we’ve got from now until October – and negotiate.

“And let’s come to a reasonable solution. Of course we don’t want to [strike], it’s a last resort.”

Fears are mounting of a ‘summer of discontent’ after Boris Johnson today indicated public sector workers should not expect an inflation-matching pay rise.

Boris Johnson at a school. The head of the NEU said: “I’m saying to [Education Secretary] Nadhim Zahawi get round the table – we’ve got from now until October – and negotiate"
(

CPI inflation was up 9% in April and could top 10% in May’s figures, which will be released at 7am on Wednesday.

Dr Bousted confirmed “we're going to be asking for a pay rise, which matches inflation.” Nurses’ and other unions are set to ask for similar hikes.

But Downing Street today warned pay rises in line with inflation are “not feasible”.

Boris Johnson told his Cabinet “the public would expect the government to stick within their means at a time of global cost of living pressures”.

And the PM’s spokesman confirmed he agreed with Chief Secretary to the Treasury Simon Clarke, who said it will not be “sustainable” to raise public sector pay by 9% or 10%.

The government argues such rises will fuel a wage-price spiral, with one senior Tory arguing it is like a dog chasing its tail.

Another teachers’ union, the NASUWT, has called for a 12% pay rise and has also said it could ballot for industrial action.

And the NEU’s Dr Bousted said tonight: “I think the anger is hotter now amongst teachers than it has ever been.”

She went on: “They're very angry and they're very, very worried about their pay.

“I’ve just been looking at survey we've done with our members and we've got members saying they can't afford to fill their tanks to drive to school.

“We’ve got members who are working 60 hours a week taking on second jobs.”

Calling for a proper pay rise, she said: “If the Secretary of State refuses to do that, that we will then survey our members to see if they are willing to take strike action, which is always a last resort.”

An Opinium poll of 1,091 UK adults today for TalkTV found 41% support the rail strikes and 42% oppose them.