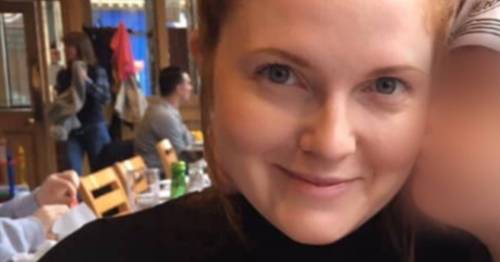 A teacher was so drunk on the night she allegedly kissed a pupil that a colleague was surprised she was even able to stand, a hearing was told.

Ashley McConnell said she visited several bars and was ordering two drinks at a time as well as shots during a night out in Thurso, Caithness, Scotland, with friends in March 2018.

The physics teacher, who taught at Thurso High School, then went to a local nightclub, Skinandi's, where she is alleged to have danced in a sexualised manner with a pupil.

Mrs Sutherland also added that she didn't know "how she was still standing".

It's alleged that later that evening Miss McConnell, who was 30 at the time, kissed the 17-year-old "three or four times", touched his bottom and groin and held hands with him.

McConnell was described as so drunk she couldn't speak properly

McConnell was on a night out with colleagues

The mum-of-two, who was married at the time, remembers the pupil standing in front of her but can't recall if more happened due to the amount of alcohol she drank.

Giving evidence to the General Teaching Council for Scotland (GTCS), Mrs Sutherland said: "The whole science department was in my house for my 50th birthday, we had a takeaway and drank some wines and beers.

"Ashley had a lot to drink at my house, that was before we had even gone out, when I left her she was really drunk, she was hardly stringing two words together.

"I was reasonably sober, because we were in my house.

"I didn't really feel drunk at any point that night and I was very aware of how drunk she was.

"She'd been drinking beers but I think Jack Daniels as well and when I left she gave me a big hug and was slurring her words saying 'I love you', I don't know how she was still standing."

She continued: "As a teacher you maybe don't want to be in that kind of state but in my opinion she was in a pub for over 18s and a nightclub where she should not be encountering any pupils.

"She should not have been put in a position where there were pupils there in the first place."

On Tuesday Miss McConnell admitted that she couldn't remember all of her actions on the night in question.

She said: "I don't remember dancing with him but that isn't to say I didn't dance with him.

"I also don't remember some of the other stuff which might have happened but that was me just trying to be as honest as I could be.

"I feel it is quite significant to kiss someone, it is something that I would remember given I remember the confrontation and other memorable moments from the night.

"But I cannot claim that because I don't remember it doesn't mean it didn't happen.

"You know anyone when they drink excessive amounts of alcohol they behave in ways they wouldn't behave otherwise.

"I can remember parts of the night and it is not like I have blacked out and not remembered the evening, I don't have an explanation, it is just the effect of drinking large amounts of alcohol.

The Scots teacher admits holding hands with the teen but denies kissing him.

She has also been accused of telling two pupils at the club to "f*** off" before gesturing two fingers at them.

She then allegedly said she would "fight the b***h" in reference to one of the female pupils.

Miss McConnell said: "I had a recollection of having an altercation with two girls.

"The events in the smoking area weren't clear in my mind.

"I had a confrontation in the smoking area, the two girls were very loudly speaking about my personal life, I believe, to Emilie [Charton, another teacher at the school] and it was with the intention I would hear it, speaking about saying I wasn't behaving as I should as a teacher, they felt sorry for my husband and my child and I think that touched a nerve."

Miss McConnell faces being struck off the teaching register by the General Teaching Council for Scotland (GTCS) following an investigation over her alleged behaviour.

She was suspended from her job after concerned pupils approached school bosses with a video of the alleged incident.

Students who were at the nightclub said the teacher was dancing in a "sexualised" and "dirty" manner.

The Thurso High School pupil that Miss McConnell was accused of acting inappropriately and told school bosses he kissed her "three or four times".

Previous : Russian state TV in chilling threat as it urges British Embassy address to be changed – World News
Next : Young mum battling cancer desperate for a home but landlords refuse to house her