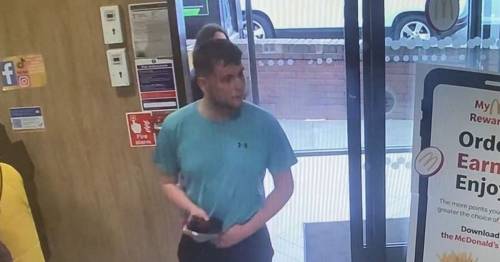 CCTV footage has today been released by police of a man who could be involved with a string of illegal transactions.

They believe that by revealing this video, it could help with their investigation in finding the crook, report Liverpool Echo.

Police believe the card was used by a man last seen making a payment at a McDonald's in Kirkdale, Liverpool.

Merseyside Police are now looking to speak to the man after the son of an 83-year-old noticed more than 30 fraudulent transactions in a week in March – which included a trip to the fast food chain.

The son also calculated that the offender shockingly spent more than £800 on shopping in total at the expense of his parent.

The son of the 83-year-old victim noticed the odd transactions were made fraudulently, which led to the bank card being reported to the bank. No members of staff at the care home are suspected of the crime.

The transactions have come after a bank card was stolen from an elderly woman in a Damfield Care Home in Maghull.

Inspector Edward Barr said: “This is a callous and despicable crime on a vulnerable woman who has dementia. The thief has brazenly used the stolen bank card more than 30 times – fraudulently obtaining more than £800 worth of goods."

More than 30 fraudulent transactions in a week were processed, at the expense of the 83-year-old – which included a trip to McDonalds
(

Enquiries have been carried out with detectives now looking to speak to a man who they believe could assist with their investigation into the incident.

Inspector Barr added: “I am appealing to the person featured in this image, or anyone who recognises him to come forward. We believe he could hold information that could be vital to our continuing enquiries.

"We are determined to find the offender so that other people are not targeted in this manner."

He continued: If you hold information about the theft of the bank card, then please contact us so we can bring the offender to justice."

Merseyside Police have condemned this crime as 'callous'